Cuisine of Valladolid facts for kids

Kids Encyclopedia Facts
(Redirected from Cuisine of the province of Valladolid)

Lechazo asado (roast lamb), shown above, is a typical dish from the province. On left a dish of lechazo and on the right a dish of pincho de lechazo. 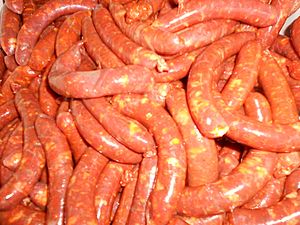 Red and white sausages from Zaratán. 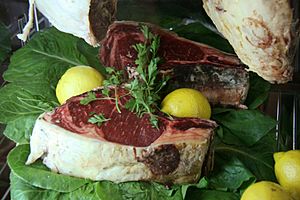 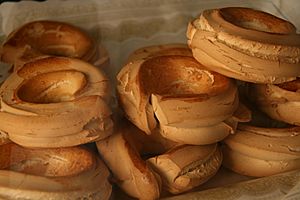 Bread donuts. The bread made in the province has a tradition that goes back to the 9th century. 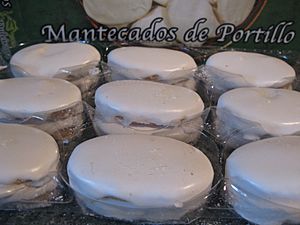 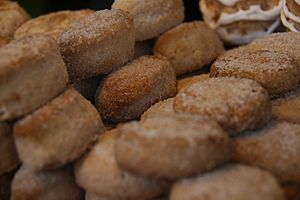 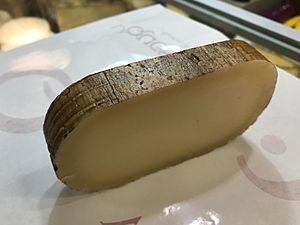 A wine Blancos de Rueda ("white wheel") made from the Verdejo grape. 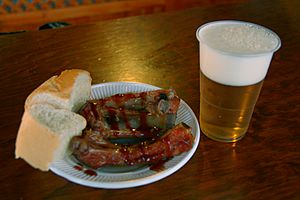 A tapa. The national competition of tapas of Valladolid.

A large amount and variety of cereals (wheat, maize, barley, rye) are grown locally and form the basis of high-quality breads. The animal husbandry of the province is also capable of producing some outstanding cheese, such as queso de Villalón [es] (cheese of Villalon) (similar to queso de Burgos [es]).

Between the cookeds is the cooked Spanish (with "ball" to which is added for flavoring spearmint), sopa de chícharos (or guisantes) (pea soup) which is prepared with peas (in Spanish, pea is guisante or chícharo). The coliflor al ajoarriero (cauliflower in garlic). Between the legumes are dishes such as alubias con patuño de cerdo (beans with pork leg). Within the cereals are the pans and its derivatives as the sopa de ajo garlic soup, the sopa de bestia cansada (soup of beast tired) of Medina del Campo to be offered to the mules of the muleteers. It is an area of ajoarrieros (which means muledriversgarlic), for example ajo de Vallelado (garlic of Vallelado).

Meats and sausages in the region are famous for their unique flavor. The province belongs to the area of Spanish-style barbecued roasts.

Other pork-based sausages are morcilla de Valladolid (black pudding from Valladolid spiced with a special kind of onion), and salchichas (sausages) from Zaratán. Chorizo is also used in dishes such as tortilla de chorizo (chorizo omelette). For beef produces a tojunto [es] (no translates), like "tojunto of Castile" (influence of gastronomy of Aragon).

Of the smaller game, there are preparations such as the conejo a la cazadora (rabbit to the hunter).

Among the fish, like other Castilian provinces there are trout dishes, an example being the truchas con jamón (trout with ham).

Other generic dishes popular in the province include arroz con leche (rice pudding).

It is common during Holy Week to consume special food that is part of the Gastronomy of Holy Week (mainly desserts).

On September 8 in Valladolid during the celebration of the Virgen de San Lorenzo [es], sweets, pastas, pastries and other desserts are usually served, one highlight being the tarta de San Lorenzo (pie of Saint Laurence).

On dates near Halloween and All Saints' Day (October 31 and November 1, respectively) it is very typical to consume products known as Hueso de santo [es] (saint's bones) and buñuelos (similar to fritters).

At Christmas, the Gastronomy of Christmas is abundant and diverse, with many sweet dishes, such as turrón, the polvorones of Tordesillas being the most famous, Date palm, marzipan, and Dragées.

It is also usual eat typical dishes of dates, such as suckling pig, chicken, turkey, capon, lamb and mutton, and bream and prawns (in addition to other seafood).

On 31 December (new year) it is a tradition to eat Twelve Grapes to the rhythm of the first twelve bells of the new year.

In the early morning of 1 January "chocolate with churros" is often eaten, either at home with families or in a chocolatier, coffeehouse, or bar. On 6 January (Day of the Three Kings) it is usual to eat the traditional roscón de reyes (king cake).

Wines from the province of Valladolid are among the best in the world due to their outstanding taste and quality. Many of the most famous come from the Vega Sicilia winery. The province has five wines with a denomination of origin. Wines with a Rueda Denomination of Origin were court wines at the time of the Catholic Monarchs. They are produced from a range of verdejo grapes, and to a lesser measure from Sauvignon blanc cultivars. Under this appellation there are white, sparkling, red, pink and liquor wines. For their part, the wines of Ribera del Duero are elaborated with the ink on the country and you can taste red wines young, reserve wine and old vine. Wines of the Toro Designation of Origin are mainly white, rosé and red; the wines of Tierra de León Denomination of Origin are white, rosé and red and finally, there are the rosé wines of the Cigales denomination of Origin 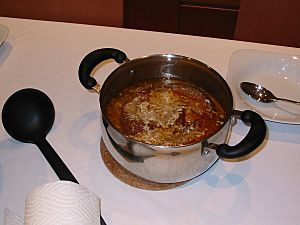 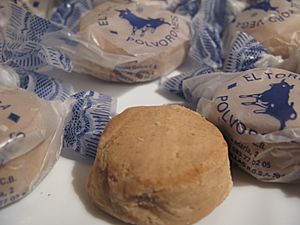 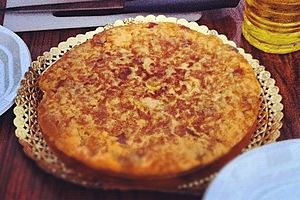 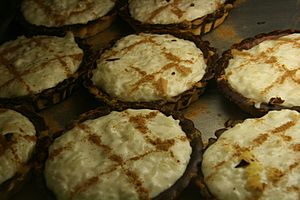 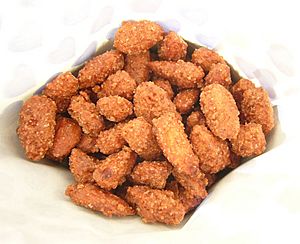 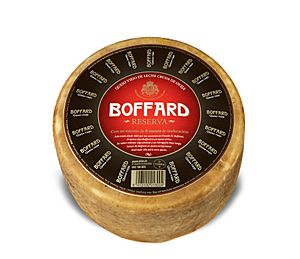 All content from Kiddle encyclopedia articles (including the article images and facts) can be freely used under Attribution-ShareAlike license, unless stated otherwise. Cite this article:
Cuisine of Valladolid Facts for Kids. Kiddle Encyclopedia.