Culley Run (also known as Cully Run or Colley Run) is a tributary of Fishing Creek in Columbia County, Pennsylvania, in the United States. It is approximately 1.4 miles (2.3 km) long and flows through Benton Township. The stream's watershed has an area of 1.45 square miles (3.8 km2). Shale, sandstone, alluvium, and glacial till can be found in the watershed. At least one bridge crosses the stream. The stream is most likely named after Alexander Colley, Sr. 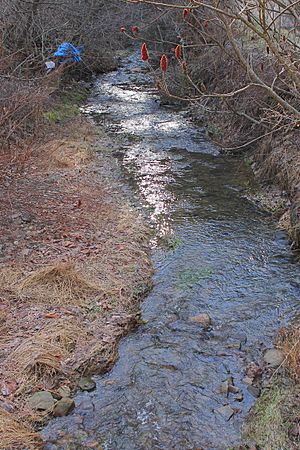 The Pennsylvania Department of Transportation has made plans to put 75 feet (23 m) of rock slope protection on the right bank of Culley Run at a location 0.75 miles (1.21 km) west of the intersection of Pennsylvania Route 254 with Pennsylvania Route 487. This project was expected to permanently affect 75 feet (23 m) of Culley Run and 110 feet (34 m) of Fishing Creek. The Pennsylvania Department of Transportation also has a permit to maintain a box culvert made of reinforced concrete on the stream. This culvert is 14.0 feet (4.3 m) long and 5.5 feet (1.7 m) high and is sunk 1 foot (0.30 m) into the streambed.

Culley Run flows over alluvium in its lower reaches. This alluvium contains stratified sand, silt, gravel, and some boulders. It is approximately 6 feet (1.8 m) thick. Colluvium can also be found in the vicinity of the stream's lower reaches. It contains shale and sandstone pieces of various sizes. A glacial till known as the Illinoian Till can be found in the upper reaches of the stream's watershed. Bedrock containing red and gray sandstone and shale also occurs in the watershed.

There is a bridge carrying Pennsylvania Route 254 over the stream. The bridge was repaired at one point for a cost of $104,000.

The watershed of Culley Run has an area of 1.45 square miles (3.8 km2). The stream is entirely in the United States Geological Survey quadrangle of Benton.

Culley Run is also known as Colley Run. Walter M. Brasch asserts in his 1982 book Columbia County Place Names that Colley Run is the correct name of the stream, although it is officially known as Culley Run. Brasch states that the stream is most likely named after Alexander Colley, Sr., a surveyor and teacher who served on the Pennsylvania legislature from 1822 to 1823.

All content from Kiddle encyclopedia articles (including the article images and facts) can be freely used under Attribution-ShareAlike license, unless stated otherwise. Cite this article:
Culley Run Facts for Kids. Kiddle Encyclopedia.