Daceyville is a suburb in the Eastern Suburbs of Sydney, in the state of New South Wales, Australia. Daceyville is 7 km south of the Sydney central business district and is part of the Bayside Council.

Daceyville is a mostly residential suburb, surrounded by the suburbs of Kingsford, Eastlakes and Pagewood. It features Australia's first cul-de-sac street on Colonel Braund Crescent. 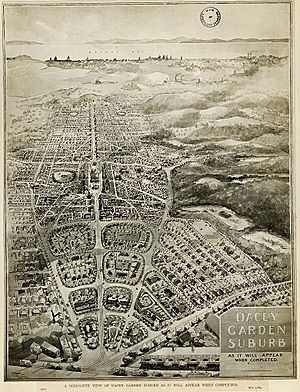 Daceyville was named after John Rowland Dacey (1854–1912), a state parliamentarian for the area from 1895 to 1912, who urged the creation of a garden suburb modelled on the garden city of Letchworth in Hertfordshire, England. The plan was executed after his death with a plan to provide low-cost housing for working-class people. Sir John Sulman (1849–1934) planned the estate on crown land that had been reserved as a water conservation site. Daceyville was listed on the Register of the National Estate in 1991.

Astrolabe and Boussole Roads were named after the two ships commanded by La Perouse, the French explorer who arrived at Botany Bay just days after the First Fleet in 1788.

The Daceyville tram line opened in 1913 with services from Circular Quay via Waterloo. The line branched from the Botany Road line at Gardners Road, and passed east along Gardners Road to join the lines at Anzac Pde at what was known as Daceyville Junction. It included a large collection of sidings at the former Rosebery Racecourse, now the site of The Lakes Golf Course. Some services were extended to Maroubra Beach via the Anzac Parade lines. The line closed in 1957.

The school is situated on a five-acre site between Bunnerong Road and Banks Avenue. Application was originally made for a public school in the area in 1913, but only an infants school was initially approved. This opened at Astrolabe Road in 1914. It became a primary school in 1917.

As the suburb grew, the school became inadequate and a new site of five acres was obtained from the Housing Board, at the present site. A new building was constructed in 1921, but the new school rapidly outgrew its new premises, leading to further extensions that were completed in 1925.

According to the 2011 census, there were 1,164 residents in Daceyville. 4.7% of residents were Aboriginal and Torres Strait Islander people, more than the national average of 2.5%. Daceyville had a substantial older aged population, with 35.1% of residents being over 65 years old. The most common ancestries in Daceyville were Australian 22.5%, English 18.5% and Irish 10.1%. Most residents were renting their homes (75.3%) and semi-detached houses were the most common dwelling type (51.4%). Daceyville residents had a median household weekly income of $462, well below the national median of $1,234.

All content from Kiddle encyclopedia articles (including the article images and facts) can be freely used under Attribution-ShareAlike license, unless stated otherwise. Cite this article:
Daceyville Facts for Kids. Kiddle Encyclopedia.