Daleville is a city in Dale County, Alabama, United States. At the 2010 census the population was 5,295, up from 4,653 in 2000. It is part of the Ozark Micropolitan Statistical Area. The city's nickname is "Gateway to Fort Rucker", as this U.S. Army post is located just north of town. Cairns Army Airfield is located to the south of Daleville on the road to nearby Clayhatchee.

Daleville, originally known as "Dale's Court House", was founded in 1827 by veterans of the Creek Indian War who had settled in Dale County following that conflict. It was established as the original county seat of Dale County in 1827 but lost that honor when Coffee County split from Dale in 1841, at which time the seat was moved first to Newton, and then later to Ozark in 1870, where it remains today.

The name of Daleville was adopted in 1848. Daleville voted to incorporate in 1912, but rescinded it in 1916. It later voted for incorporation in 1958.

Residents of the town formed portions of two regiments of the Confederate States Army during the U.S. Civil War: the 15th Alabama Infantry, famed for charging the 20th Maine on Little Round Top during the Battle of Gettysburg, and the 33rd Alabama Infantry. In the latter regiment, Company "G", called the "Daleville Blues", was recruited entirely from Daleville. Several men from this company were killed in a freak train derailment on 4 November 1862 near Cleveland, Tennessee; the remainder would fight with the rest of the 33rd in the Confederate Army of Tennessee until the final surrender in 1865.

Long a tiny farming community, Daleville saw significant expansion during the mid-to-late twentieth century with the establishment and enlargement of Fort Rucker, the U.S. Army's primary aviation training post. Douglas Brown, a former mayor of Ozark, teamed up with two Georgia businessmen, L.C. Hall and Bob Culpepper, to develop the city. Securing a 1.5 million dollar loan, the trio purchased 400 acres (1.6 km2) of land in Daleville, constructed a lagoon sewer system and began to build the town house by house, shopping center by shopping center. Numerous military personnel then made their homes in the community, and many elected to stay after their retirement or otherwise completing their service obligation. This large military presence gives the town a more cosmopolitan populace than other area towns farther away from the base.

Daleville was the victim of an F1 tornado on 24 November 2001, part of the Arkansas-Mississippi-Alabama tornado outbreak that occurred on 23 and 24 November of that year. Two restaurants and two industrial buildings were destroyed; a local lounge suffered severe damage as well. Also damaged were maintenance buildings, one aircraft, 25 businesses, a church, gas station, two supermarkets, a bank and several homes. 25 people inside the lounge were injured, but no fatalities were reported.

According to the U.S. Census Bureau, Daleville has a total area of 14.1 square miles (36.5 km2), all land. The Choctawhatchee River flows a few miles east of the city. 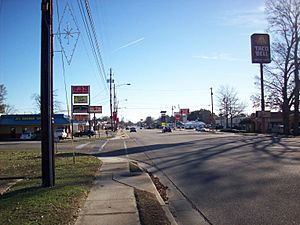 There were 1,980 households out of which 31.7% had children under the age of 18 living with them, 44.2% were married couples living together, 14.8% had a female householder with no husband present, and 37.1% were non-families. 31.5% of all households were made up of individuals and 8.2% had someone living alone who was 65 years of age or older. The average household size was 2.35 and the average family size was 2.96.

There were 2,384 households out of which 25.1% had children under the age of 18 living with them, 36.0% were married couples living together, 15.4% had a female householder with no husband present, and 43.2% were non-families. 37.2% of all households were made up of individuals and 8.8% had someone living alone who was 65 years of age or older. The average household size was 2.22 and the average family size was 2.92.

All content from Kiddle encyclopedia articles (including the article images and facts) can be freely used under Attribution-ShareAlike license, unless stated otherwise. Cite this article:
Daleville, Alabama Facts for Kids. Kiddle Encyclopedia.