He is known for his accuracy, flight and guile rather than prodigious turn, and also his speed variation. Vettori announced his retirement from all forms of cricket following the 2015 Cricket World Cup.

He was born in Auckland and brought up in Hamilton, attending Marian School and later St. Paul's Collegiate School, where he started off playing as a medium-pacer, but slowly transitioned into a spinner. He was among a very small minority of international sports stars to wear prescription spectacles while playing sport, and only one of very few cricketers in the modern era to play Test cricket with spectacles, others including Zimbabwean Charles Coventry, Australian Chris Rogers, Englishman Jack Leach and West Indian Clive Lloyd. 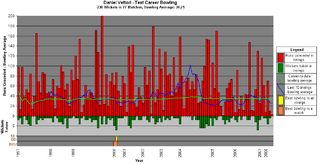 He took his 300th Test wicket in Sri Lanka in 2009, becoming only the second New Zealand bowler (after Richard Hadlee) to pass that mark and he is currently New Zealand's leading ODI wicket-taker.

Vettori has three 10 wicket hauls in Test cricket, against Sri Lanka, Australia, and Bangladesh. His best innings figures were achieved in Auckland in 1999–2000 against Australia where he took 7/87. He finished with career best match figures in that game, taking 12/149. They are the second-best ever by a New Zealander, with only Richard Hadlee having taken more in a match. With another 12 wicket effort, against Bangladesh in Chittagong, he became the only New Zealander to have taken a dozen wickets in a Test on two occasions.

He is the bowler to have most frequently dismissed Shane Warne in Tests, getting him out nine times, most notably for 99 in a Test at Perth. Ironically, in the 1st Test against Pakistan in 2009–10 season, Vettori was himself dismissed for 99, while chasing a world record in centuries batting from position number 8. He is also the leading runscorer in test history when batting at number 8 position or lower (2227 runs) Daniel Vettori also has scored most number of test tons when batting at number 8 position(4) 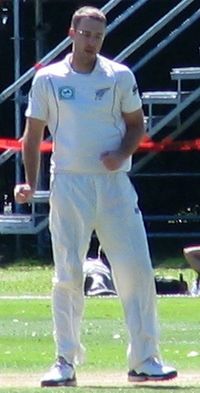 Prior to becoming captain on a permanent basis in 2007, Vettori had captained the Black Caps in ODI cricket on occasions such as when regular captain Stephen Fleming was not available. As of the end of 2006, he had led New Zealand in 11 games, winning eight of them.

He captained New Zealand at the inaugural Twenty20 World Championship in South Africa. Subsequently, it was announced that Vettori would captain the Black Caps in all forms of the game: Twenty20s, ODIs and Tests. Initially, he was announced to be captain only of the former two.

His spell of 4 for 20 against India was named as the fourth-best T20I bowling performance of the year by ESPNcricinfo voters. He was named in the team of the tournament by ESPNcricinfo for the 2007 T20I World Cup.

Vettori's captaincy had a rocky start, starting by losing a Test series in England. Vettori also attracted some criticism in the following ODI series when he engaged in angry shouting from the balcony at The Oval, regarding a controversial run out that had occurred. He then refused to shake hands with the England team after the match. This contrasted with Fleming's more languid, laid back style.

Vettori stood down from the captaincy and retired from One day Internationals and Twenty20 Internationals after the 2011 World Cup. However, he was called back into the ODI team for the 2013 ICC Champions Trophy. His name is included in the final 15 of the New Zealand team for the 2015 Cricket World Cup to be held in Australia and New Zealand. By that point, he retired from test cricket after his final test match was as an emergency injury cover against Pakistan in November 2014. 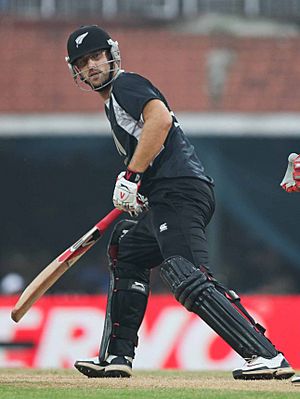 In December 2006, Vettori began establishing himself as more of an all-rounder, batting at number 5 for New Zealand in the one-day series against Sri Lanka.

On 4 December 2009, despite the Black Caps only scoring 99 runs against Pakistan, Vettori became the highest Test run scorer batting at no.8 spot, a record previously held by Shane Warne.

After suffering a dip in form of batting in 2010 Vettori scored a century against Pakistan when he made 110 as New Zealand's lower order resisted to help post a total of 356 all out. Vettori averages a career 30.60 but his average jumps to 57.9 against Pakistan against whom he has three of his six centuries.

In July 2014, he played for the MCC side in the Bicentenary Celebration match at Lord's.

A five-wicket haul, or five-for, involves a player taking five or more wickets in a single innings, and is considered a significant achievement. Vettori is credited with 22 five-wicket hauls. Of his five-wicket hauls, Vettori has taken 20 in Test cricket and two in ODI matches. He has not yet achieved the feat in a T20i.

Vettori's 362 Test wickets lies second only to Richard Hadlee among all New Zealand Test bowlers. He made his Test debut during England's 1997 tour of New Zealand as the youngest to have ever played Test cricket for New Zealand, and took his first five-for against Sri Lanka in March that same year. His best bowling figures were achieved in March 2000 against Australia, where he took seven wickets for 87 runs. He has taken ten wickets across an entire Test match on three occasions. Vettori played his first ODI match in March 1997 and is his country's leading wicket taker. His maiden five wicket haul came in July 2004 against the West Indies, where he took five wickets for thirty runs—5/30—which gave New Zealand victory in the final of the 2004 NatWest Series. His other five-wicket haul in ODI cricket came in 2007 against Bangladesh, where he took five wickets for only 7 runs.

He was head coach for Royal Challengers Bangalore from 2014 to 2018. In July 2019, Vettori was appointed as the head coach of the Dublin Chiefs for the inaugural edition of the Euro T20 Slam cricket tournament. Bangladesh Cricket Board announced the appointment of Vettori as their spin bowling coach, on 27 July 2019.

Vettori is of Italian origin. He is married to Mary O'Carroll (2007), with whom he has three children. He moved from Hamilton to Auckland to live with her but has continued playing for the Northern Districts Knights. They have a son named James (born 8 March 2009). Vettori was made an Officer of the New Zealand Order of Merit in the 2011 Queen's Birthday Honours, for services to cricket. Vettori is the first cousin of David Hill, a rugby union player who played in one Test for the All Blacks.

A biography of Vettori was published in August 2008.

All content from Kiddle encyclopedia articles (including the article images and facts) can be freely used under Attribution-ShareAlike license, unless stated otherwise. Cite this article:
Daniel Vettori Facts for Kids. Kiddle Encyclopedia.