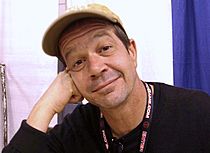 Darwyn Cooke (November 16, 1962 – May 14, 2016) was a Canadian comic book writer, artist, cartoonist and animator. He was born in Toronto, Ontario. He was known for his work on the comic books Catwoman, DC: The New Frontier, The Spirit and Richard Stark's Parker: The Hunter.

All content from Kiddle encyclopedia articles (including the article images and facts) can be freely used under Attribution-ShareAlike license, unless stated otherwise. Cite this article:
Darwyn Cooke Facts for Kids. Kiddle Encyclopedia.