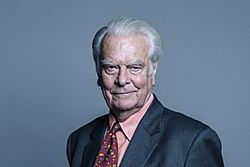 Owen served as British Foreign Secretary from 1977 to 1979. At 38 he was the youngest person in over forty years to hold the post.

All content from Kiddle encyclopedia articles (including the article images and facts) can be freely used under Attribution-ShareAlike license, unless stated otherwise. Cite this article:
David Owen Facts for Kids. Kiddle Encyclopedia.