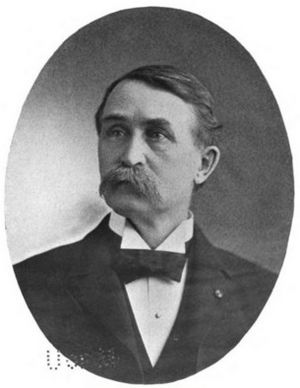 David Whitney Curtis (November 14, 1833 – April 18, 1897) was a farmer and businessman in Fort Atkinson, Wisconsin. He served as a Union Army officer in the American Civil War. In addition, he was a Republican Party politician who served as a member of the Wisconsin State Assembly.

Curtis was born on November 14, 1833 in Chelsea, Vermont. His family moved to Wisconsin in 1845. He was educated in Vermont and Wisconsin, taught school, and worked as plasterer and bricklayer.

Curtis served with the 29th Wisconsin Volunteer Infantry Regiment of the Union Army during the American Civil War, achieving the rank of captain. Engagements he took part in include the Battle of Port Gibson, the Battle of Champion Hill, the Siege of Vicksburg, the Jackson Expedition and the Battle of Mansfield.

He served on the military staff of Governors William E. Smith and William D. Hoard as Chief Engineer with the rank of colonel.

Curtis was active in the Grand Army of the Republic, and served as assistant quartermaster general of the Wisconsin Department.

After the war Curtis became a dairy farmer, and was a partner in Cornish & Curtis (later Cornish, Curtis & Greene), a lumber, grain and produce business, which also made farm machinery and manufactured dairy product packaging.

Curtis served as Secretary of the Wisconsin Dairymen's Association from 1875 to 1897.

Curtis was a Republican member of the Assembly during the 1876 session.

In 1894-95 he was a member of the Republican Central State Committee.

His home, the David W. and Jane Curtis House was added to the National Register of Historic Places in 2009.

All content from Kiddle encyclopedia articles (including the article images and facts) can be freely used under Attribution-ShareAlike license, unless stated otherwise. Cite this article:
David Whitney Curtis Facts for Kids. Kiddle Encyclopedia.