Dayton is a city in Liberty County, Texas, United States. The population was 7,242 at the 2010 census.

According to the United States Census Bureau, the city has a total area of 11.0 square miles (28 km2), all land.

There were 2,129 households out of which 37.4% had children under the age of 18 living with them, 50.5% were married couples living together, 16.4% had a female householder with no husband present, and 28.7% were non-families. 25.2% of all households were made up of individuals and 12.1% had someone living alone who was 65 years of age or older. The average household size was 2.66 and the average family size was 3.18.

Dayton, on U.S. Highway 90 six miles west of Liberty in southwestern Liberty County, was first called West Liberty and was considered part of the original town of Liberty, founded in 1831. The Trinity River divided the two parts of the town: Liberty was on its east bank, and West Liberty was on a hill three miles west of the river. A new road and a ferry directly connected the two. Both parts of the town were located on the four-league Mexican land grant appropriated for the capital of the old municipality of Santísima Trinidad de la Libertad, which later became known as Liberty. The postmaster of West Liberty from March 25, 1839, through September 15, 1841, was A. Thouvenin, probably the same man as Arnold Thouvenin, who obtained a quarter-league Mexican land grant in Polk County in April 1835. The West Liberty post office was apparently discontinued after a few years. Land was designated for a school in 1847. The schoolhouse was accepted on December 31, 1853, by the board of trustees of the Corporation of the Town of Liberty. Also in 1853, A. N. B. Thompson was authorized to survey and plat the town of West Liberty. During the Civil War, thirty-three ladies of West Liberty wrote to Governor Francis R. Lubbock in January 1863, petitioning him to relieve Mr. Sol Andrews of his military duties so that he might continue his vocation of manufacturer of looms and spinning wheels, as cloth for clothing was desperately needed.

Sometime after 1854, West Liberty also became known as Day's Town, for I. C. Day, a wealthy landowner who resided just to the south of the town on the Munson league. The flag stop for the Texas and New Orleans Railroad, completed in 1860, was known variously as West Liberty, Days Station, and Dayton Station. The name Dayton was applied to the local post office in 1877, though the official name of the town remained West Liberty until the mid-1880s. In 1885 Dayton reported a population of sixty, and in 1890 a post office, a school, and two churches served its 239 residents. The single room schoolhouse has been preserved by the historical society. 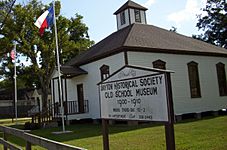 Texas governor Marion Price Daniel, Sr., was born in Dayton on October 10, 1910; his brother Bill Daniel, governor of the United States Territory of Guam from 1961 through 1963, was born in Dayton on November 20, 1915. The Daniel brothers were grandsons of General Sam Houston who had led victory for the Republic of Texas independence in 1836. By 1910, the town had a bank, two cotton gins, a weekly newspaper, and 2,500 inhabitants. Dayton was recorded as an incorporated municipality on May 3, 1911. The mayor was W. M. Babcock, and aldermen were W. T. Jamison, J. H. Marshall, J. A. Coleman, and J. D. Spear. Town records indicate that the community was reincorporated in 1925. Oil development during the 1920s brought new industries. By 1940 Dayton reported 1,207 residents and seventy businesses and was listed as a railroad center. The population increased steadily from 3,367 in 1965 to 6,201 in 1988. In 1989 the largest school population in the county made the Dayton Independent School District the major employer in the city. At that time Dayton operated under a mayor-council form of city government. In 1990 Dayton had a population of 5,151, and in 2000 the population was 5,709.

The major route passing through Dayton is U.S. Highway 90, traveling west towards Crosby and Houston and east into East Texas to Beaumont and onward to Louisiana. SH 321 connects Dayton to Cleveland. Within the city of Dayton, SH 321 is referred to as North Cleveland Street, passing through residential Dayton as a four-lane urban highway, before narrowing back down to a two-lane rural State Highway going north to Cleveland. SH 146 provides Dayton with a connection to Baytown, and FM 1960 connects Dayton to the northern reaches of Houston as well as Humble and Huffman.

Dayton was the site of a reported UFO incident on December 29, 1980 at 9:00 p.m. local time in which three people insist they were irradiated by a UFO.

The climate in this area is characterized by hot, humid summers and generally mild to cool winters. According to the Köppen Climate Classification system, Dayton has a humid subtropical climate, abbreviated "Cfa" on climate maps.

All content from Kiddle encyclopedia articles (including the article images and facts) can be freely used under Attribution-ShareAlike license, unless stated otherwise. Cite this article:
Dayton, Texas Facts for Kids. Kiddle Encyclopedia.