Defence in depth facts for kids

Kids Encyclopedia Facts
Not to be confused with Defense in depth (computing). 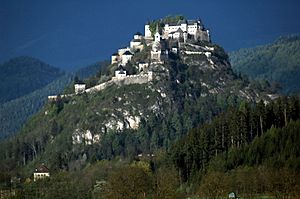 Defense in depth (also known as deep or elastic defense) is a military strategy. It is a delaying tactic intended to slow down the advance of an enemy instead of stopping them. The tactic buys time by yielding to the enemy slowly. It usually causes additional casualties. A defense in depth can slow down an advancing army causing them to lose momentum.

Hannibal used this tactic at the Battle of Cannae in 216 BC. Facing a much larger Roman army, he placed his less experienced soldiers in the center. On either side were his most experienced fighters. When the Romans advanced, his center gradually moved back while the troops on the wings began to surround the Romans. It was the largest slaughter of Roman soldiers in the history of the republic.

The classic example is Medieval hill forts and castles with rings of defenses (usually walls). The inner circles of defenders support the outer circles with missiles fire. The attacker has to breach each line of defense exhausting himself in the process.

A properly planned defense in depth can be used to reduce or eliminate any advantage an attacking force might have. This includes superior numbers. The defender places the object of the attack behind several layers of defense. The defenders then let the attacker wear down his forces while they slowly give ground and move back to the next layer of defense.

Carl von Clausewitz, Sun Tzu and the martial art of Budō all agreed that the preferred form of war was defense. Clausewitz stated that defense provided the defenders with additional opportunities. A defense in depth can prevent an enemy from surrounding your position. It also provides an excellent opportunity to Counterattack. A defense in space is not being there when an enemy attacks. A defense in time means slowing down or blocking an enemy when they do attack.

A similar tactic is called a delaying action. The object is for a smaller force to harass a larger force and delay their advance. This while inflicting as much damage as they can to the larger force without directly engaging them. The purpose of a delaying action is to allow an army's main force to disengage an enemy while maintaining good order. The main force is given the time necessary to set up a new defensive position. The small force protecting the larger force is called a rearguard. A famous rearguard example was given in the Song of Roland. Roland, nephew of Charlemagne commanded the rearguard at the Battle of Roncevaux Pass. He and his men protected the rear of the Frankish army while they retreated back to France. In this delaying action, Roland and his men were all killed in an ambush.

All content from Kiddle encyclopedia articles (including the article images and facts) can be freely used under Attribution-ShareAlike license, unless stated otherwise. Cite this article:
Defence in depth Facts for Kids. Kiddle Encyclopedia.