Delhi Township (del-hi) is one of the twelve townships of Hamilton County, Ohio, United States. The 2010 census found 29,510 people in the township. It is the only Delhi Township statewide.

It is the only Delhi Township statewide.

Delhi is also known for their appearance in the 1983 music video Electric Boogaloo.

In January 2014, Delhi was ranked as the 18th safest neighborhood in Ohio. 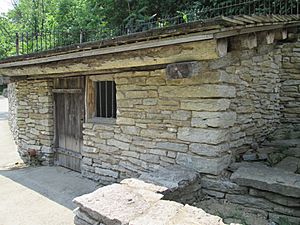 The Sedam Springhouse, which may date back to the 1790s, is one of the oldest buildings in the township. Now known as the Delhi Springhouse, the structure stands on land near the stone house Colonel Cornelius Ryker Sedam built in 1796. The house no longer exists, but the springhouse has been restored. The structure protected a natural spring, which supplied water as late as 1937. The springhouse was also used to provide storage for perishable foods.

Located in the southwestern part of the county along the Ohio River, it has the following borders:

Much of what was once part of Delhi Township, including its entire shoreline along the Ohio River, is part of the city of Cincinnati, the county seat of Hamilton County. Unincorporated communities in the township include Delhi Hills, Delshire, and Mount Saint Joseph. The Cincinnati communities of Price Hill, Sayler Park, Sedamsville and Riverside were part of Delhi Township until they were annexed by Cincinnati at the turn of the 20th century. 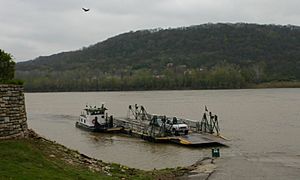 The Anderson Ferry with the hills of Delhi in the background

The township has an area of 10.1 square miles (26.1 km2). Because the township covers the slopes leading down to the floodplain of the Ohio River, the township contains many hills, and its landscape is cut by a number of ravines caused by streams that make the descent. 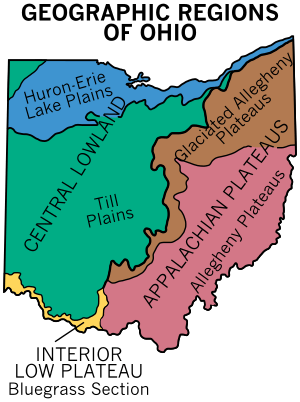 Physical geography of Ohio. Delhi is located in the yellow. 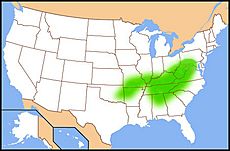 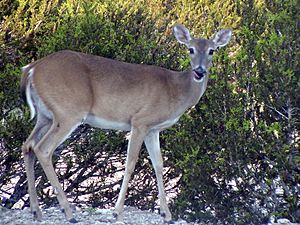 White Tailed Deer are very common to see in Delhi

Delhi has various annual celebrations, including the Delhi Skirt Game. The Delhi Skirt Game is a Chicago-style softball game between officers of the Delhi Township Police Department and the Delhi Fire Department; the teams consist of male officers dressed in drag. The game is played in Delhi Park on the first Friday of August, with festivities surrounding the game including live music, games of chance, concessions, auctions and fireworks. The Skirt Game benefits needy families of Delhi Township.

Following an 1850s grape blight which destroyed most of the township's vineyards, many growers turned to vegetable farming instead. On the heels of a successful transition to vegetable farming, growers began to construct greenhouses in order to extend the growing season. At some point in the 1920-1930s period, most all of the Delhi greenhouse operators began to realize the greater profit potential of growing flowers, and subsequently converted their greenhouses from vegetable-centric operations to growing cut flowers full-time.

The peak of local hothouse agriculture was reached during the late pre-WWII years, when as many as 55 family-run greenhouses operated in the township. Notably, Delhi Township-based greenhouses produced a significant percentage of carnations supplied throughout the United States by this time. In the local region, Delhi Township became known as the "Floral Paradise of Ohio", a trademark phrase that is still featured on modern, official Delhi Township signage.

The importance of greenhouses in Delhi Township was even reflected in the equipment of the Delhi Township Fire Department; as late as 1986, small-diameter fire attack lines were equipped with iron pipe couplings (rather than otherwise ubiquitous National Standard threads) in order to be compatible with the fittings in use on most greenhouse irrigation standpipes of the time. This arrangement permitted firefighters to connect their hoses to the source of water closest to an interior greenhouse fire, eliminating the need to drag (potentially) hundreds of feet of heavy, charged hose connected at the fire apparatus's pump panel outside. In this arrangement, water pressure in the involved greenhouse was boosted by a connection from the pumper to a standpipe connection on the outside of the structure. The requirement to carry a large variety of thread adapters (in order to be compatible with nearby, mutual aid departments), along with the rapid, penultimate decline of hothouse agriculture in Delhi Township led to the complete standardization to National Standard-threaded couplings within the department by the late 1980s.

Today, only a few family-run greenhouses remain—the combined results of a decline in business due to foreign flower imports, as well as the lucrative conversion of greenhouse properties to land made available for residential and commercial development in the post-World War II suburbanization boom. 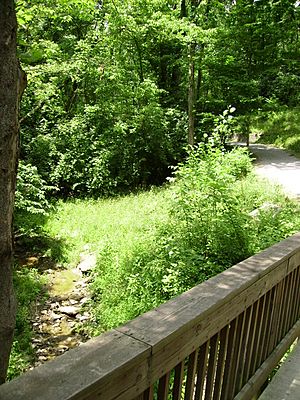 Story Woods Park, part of the Delhi Park system, has three main paths and is located within woods next to Rapid Run Middle School.

The township operates over 100 acres (40 ha) of park property. Parks operated by the township include Delhi Park, Five-Points Park, and Story Woods Park. Delhi Park, which opened in 1954, is the oldest park in the township. It has nine ball fields, including baseball courts, football fields, soccer fields, tennis courts, and sand volleyball courts. Delhi Park also has the Glen Carder Lodge, four picnic shelters and the "Spray Park." Five-Points Park, a 1.1 acres (0.45 ha) park, has a gazebo and the firefighter's memorial. Story Woods Park, a 40 acres (16 ha) park, has a playground facility, a picnic shelter, toilet facilities, and 2.03 miles (3.27 km) of walking trails. The township also has the Delhi Springhouse, which opened to protect the springs. The springhouse was also used as a source of drinking water and as cold storage for perishable foods. The Great Parks of Hamilton County operates Embshoff Woods, a park which opened in 1982 and consists of 331 acres (134 ha) of protected natural areas.

In November 2007, the township dedicated Veterans Memorial Park in honor of the township's military veterans. Located within the park are the Wall of Honor Monument and the Killed-in-Action Memorial.

The Delhi Press serves the areas of Delhi and Sayler Park, Cincinnati. It is distributed once a week on Wednesdays. An average Delhi Press contains a main article, other articles about the area, school articles, athletic articles (usually focused on high schoolers), recipes, a response article, and an obituary.

Our Lady of Victory Catholic Church

Our Lady of Victory is the third oldest Catholic Church in Hamilton County, Ohio, established in 1842. OLV has a church, school and athletics. They are known as "Vipers." One notable alumnus of the school is news anchor Bill Hemmer.

Mount St. Joseph University is located in Delhi Township. It has approximately 2,200 students and offers liberal arts and professional education programs. Other nearby universities include Cincinnati Christian University, the University of Cincinnati, Xavier University, and Northern Kentucky University. 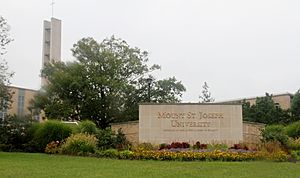 Three fire stations serve the township. Fire Station #33 serves as the fire department's headquarters. The other stations are Station #30 and Station #36.

All content from Kiddle encyclopedia articles (including the article images and facts) can be freely used under Attribution-ShareAlike license, unless stated otherwise. Cite this article:
Delhi Township, Hamilton County, Ohio Facts for Kids. Kiddle Encyclopedia.