Buffalo, New York is the second most populous city in the state of New York, after New York City. The city has a population of 278,349 as of the 2020 Census and the Buffalo–Cheektowaga–Olean Combined Statistical Area is home to 1,215,826 residents.

Buffalo was first settled primarily by New Englanders. The first wave of European immigrants was a large influx of Germans. The city was further populated by Irish immigrants first, Erie Canal builders and then escaping famine, and infused by Polish, Italian, Jewish, and more recently Latino populations, all of which have made it a melting pot of ethnic cultures. The newest immigrants are from Somalia, Sudan and Asia.

The Old First Ward retains a strong Irish identity, and Kaisertown reflects a German heritage. Buffalo's Polonia was centered at the Broadway Market on the East Side. The market serves as a microcosm of Polish/Slavic traditions and delicacies. The East Side is now home to African Americans, many of whom came north during the Great Migration. The annual Juneteenth Festival is a large cultural celebration organized by African Americans in Dr. Martin Luther King, Jr. Park.

The West Side is home to the city's Hispanic community, predominantly of Puerto Rican descent. The West Side was once Buffalo's "Little Italy," but in the 1980s much of Buffalo's Italian American community moved to North Buffalo. There is also a small Italian-American enclave in the East Side neighborhood of Lovejoy. Many Buffalo households, churches, and restaurants continue to observe the Sicilian custom of preparing St. Joseph's Day (March 19) tables, at which various meatless Lenten courses are laid out for the poor.

Buffalo is also home to a large Jewish community. German Jewish immigrants originally settled on Buffalo's Westside in the mid-19th century. Lower income Russian Jews and Polish Jews immigrating to the Niagara Frontier in the early 20th century initially settled on the Lower East Side, near William Street and Jefferson Avenue. The community migrated to the Masten Park neighborhood on the East Side, and then to North Buffalo between the 1940s and the 1960s. Although many still live in the city, particularly in North Buffalo and the Delaware District on the city's Westside, the majority of the Buffalo area's Jews now live in the northeastern suburbs. Buffalo's Jewish Community Centers are located in the Delaware District, North Buffalo and Amherst.

Distancing itself from its industrial past, Buffalo is redefining itself as a cultural, banking, educational, medical center and architectural tourism destination. In 2001, USA Today named Buffalo the winner of its "City with a Heart" contest. proclaiming it the nation's "friendliest city." Buffalo is also a two-time winner of the All-America City Award.

Like most formerly industrial cities of the Great Lakes region in the USA, Buffalo has experienced an economic depression brought about by the loss of its industrial base. The city's population peaked in 1950, when it was the 15th largest city in the United States, before entering a long trend of losing population. The demographic change and the impact of such change on the industrial cities of the region, including Buffalo, is significant; based on the 2006 US Census estimate, Buffalo's population was equivalent to its population in the year 1890, reversing 120 years of demographic change. The 2020 Census was the first census in 70 years that saw Buffalo and Erie County gain population. 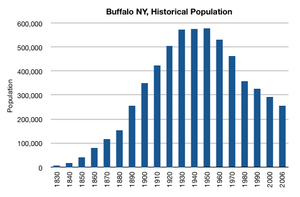 Buffalo has very sizable populations of Bosnian, Irish, Italian, Polish, German, Hungarian, Jewish, Greek, Arab, African American, Indian, Macedonian, and Puerto Rican descent. Major ethnic neighborhoods still exist but they changed significantly in the second half of the 20th century. In 1940, non-Hispanic Whites were 96.8% of the city's population. In the early 1900s, Polish-American immigrants were the predominant occupants of the East Side, while Italian-Americans composed a close-knit neighborhood in the west side. The East Side has long since become a predominantly African American area, while the West Side has become a melting pot of many ethnicities, with Latino culture being the strongest influence. Throughout the history of Buffalo, the neighborhoods collectively called the First Ward, as well as much of South Buffalo, have comprised almost entirely people of Irish descent. Recently, there has been an influx of inhabitants that are of Arab descent, mainly from Yemen, as the city's Muslim population has increased to approximately 3000 according to an estimate. Since the 1950s and 1960s, the greater portion of the Jewish population has moved to the suburban areas outside of the city, or to the city's upper West Side.

All content from Kiddle encyclopedia articles (including the article images and facts) can be freely used under Attribution-ShareAlike license, unless stated otherwise. Cite this article:
Demographics of Buffalo, New York Facts for Kids. Kiddle Encyclopedia.