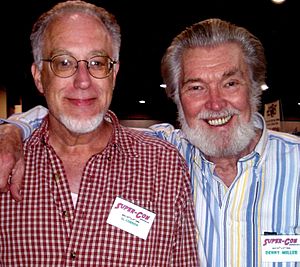 Denny Scott Miller (born Dennis Linn Miller; April 25, 1934 – September 9, 2014) was an American actor. He was best best known for his role as Tarzan in the movie Tarzan, the Ape Man (1959). He also appeared in many television series such as Wagon Train, Gilligan's Island, Magnum, P.I., The Brady Bunch and Gunsmoke.

Miller was born in Bloomington, Indiana. He was married to Kit Smythe until their divorce. He was later married to Nancy Miller until his death.

Miller died from Lou Gehrig's disease on September 9, 2014 in Las Vegas, Nevada. He was 80. He was also diagnosed with the disease in January 2014.

All content from Kiddle encyclopedia articles (including the article images and facts) can be freely used under Attribution-ShareAlike license, unless stated otherwise. Cite this article:
Denny Miller Facts for Kids. Kiddle Encyclopedia.