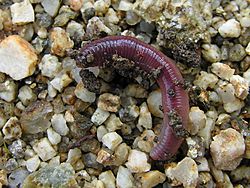 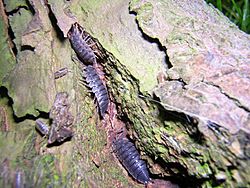 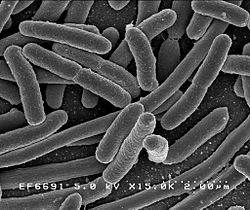 A detritivore (also known as decomposers) is an animal that feeds on dead organisms (living things) and breaks them down into smaller molecules. Detritivores are essential in the ecosystem as they return important materials such as carbon (see carbon cycle) back into the environment. Examples of common detritivores include earthworms and woodlice, but also includes microscopic (things that can only be seen using a microscope) bacteria.

All content from Kiddle encyclopedia articles (including the article images and facts) can be freely used under Attribution-ShareAlike license, unless stated otherwise. Cite this article:
Detritivore Facts for Kids. Kiddle Encyclopedia.