Diamondhead is a city in southeastern Hancock County, Mississippi, United States. The city is located just over 50 miles (80 km) northeast of New Orleans, Louisiana. It is part of the Gulfport−Biloxi Metropolitan Statistical Area. In February 2012, Diamondhead was officially incorporated as a city. At the time of the 2010 census, when Diamondhead was an unincorporated census-designated place, the population was 8,425. The city population, with slightly different boundaries, was estimated at 8,048 in 2019.

In 2009, a petition supported by the Property Owners Association (POA) to hold an incorporation election was filed with the Hancock Chancery Court and an election approved the incorporation. Opponents contended that the petition lacked a sufficient number of signatures and that incorporation requirements were not complied with. In 2010, the Hancock Chancery court ruled against the opponents who then appealed to the Mississippi Supreme Court. Further, the appeal claimed irregularities during the hearing on the original objection. On October 29, 2011, the Mississippi Supreme Court upheld the Hancock Chancery court and ruled against the irregularity claims. In January 2012, a motion for extension to appeal the decision was denied by the Supreme Court and a final edict mandating the incorporation was issued. The City of Diamondhead was presented its charter as the 111th city in Mississippi by Secretary of State Delbert Hoseman on February 6, 2012.

The town of Diamondhead was named after Diamond Head, Hawaii. This Hawaiian influence is applied throughout Diamondhead. Most of the roads are named with Hawaiian names, the various community centers and private homes have a Hawaiian look, including prominent Kona/Tahitian roof lines. Originally Diamondhead was designed by the developers in the 1970s to appeal to an older demographic looking for a place to retire near from New Orleans, Gulfport and Biloxi. It is no longer solely a retirement community, however; 23% of households in Diamondhead have children under 18.

Diamondhead on top of small bay in fuchsia

Diamondhead was one of the landfall communities of Hurricane Katrina, which inflicted severe damage. It was hit by the most dangerous north east/eastern eye wall of Hurricane Katrina and probably experienced the highest winds seen in Mississippi. Greatly contributing to the extensive damage was a record storm surge of 25–28 feet (8.5m). Nearly all of the 200 homes and townhomes facing the water on the south side of Diamondhead were obliterated. The north side fared better, and many of the people whose homes had been destroyed in neighboring cities, as well as in Diamondhead, moved into the houses which remained on the north side. Overnight, the population swelled from 6500 to 9000.

The commercial center, including stores and restaurants, was mostly destroyed and has since been rebuilt.

Unlike most of the Mississippi Gulf Coast, which is relatively level, the Diamondhead area has more rolling topography. 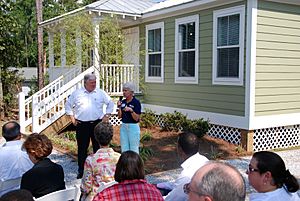 Since most of Diamondhead was a planned community it has many facilities designed to attract home buyers. Some of these facilities include:

A casino deal between Donald Trump and Diamondhead Casino Corporation fell through around March 1, 2007. DHCC still wishes to proceed and establish a casino. The Isle of Capri construction plans at the Kiln-DeLisle exit of Interstate 10 had been canceled as of November 8, 2007.

As of late 2008, casinos had applied for zoning in the south side of Diamondhead that was obliterated by Hurricane Katrina. The Silver Slipper Casino from nearby Lakeshore built a seafood restaurant, the Pier House now named Hula Club, at the former site of the yacht club over the water. The eighty-eight acres north of there is also planned to be a major resort casino. It would be the only casino in Mississippi with virtually direct interstate access (I-10).

As of June 27, 2014, the Mississippi Gaming Commission denied the site application as not being on the Bay of Saint Louis.

Diamondhead is served by the Hancock County School District.

All of Hancock County is in the service area of Pearl River Community College.

All content from Kiddle encyclopedia articles (including the article images and facts) can be freely used under Attribution-ShareAlike license, unless stated otherwise. Cite this article:
Diamondhead, Mississippi Facts for Kids. Kiddle Encyclopedia.