Kiln (pronounced "Kill") is an unincorporated community and census-designated place (CDP) in Hancock County, Mississippi, United States. The town is located about 50 miles (80 km) northeast of New Orleans, Louisiana. It is part of the Gulfport-Biloxi Metropolitan Statistical Area. The population was 2,238 at the 2010 census. 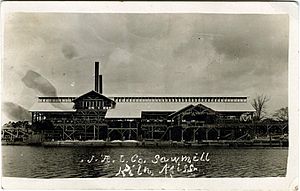 Kiln takes its name from the many kilns once found in the area that served the timber industry. During the boom years, Kiln was home to many timber mills, a hotel, and a hospital. The Jordan River Lumber Company was one of the major local employers.

"The Jordan River Lumber Company was incorporated in South Dakota in January 1913, and domiciled at Kiln, Hancock County, MS. In January 1913, the company purchased the mill of W. W. Carre Company, Ltd., at Kiln, on the Jourdon River. The original mill burned and was replaced in 1914 with a new mill with a cutting capacity of 150,000 feet (46,000 m) per day. In 1922, the mills in Kiln and Lumberton were consolidated at Barth, MS, the division point on the Mississippi Southern. In February 1930, the mill cut out and was dismantled."

A few older structures remain, including Annunciation Catholic Church and the original post office (later Curet's Grocery), which has since been turned into a lawnmower repair shop. The Kiln was partly flooded during Hurricane Katrina, along the Jourdan River and its tributary bayous, but served as a major point for reconstruction of Bay Saint Louis and Waveland afterwards. 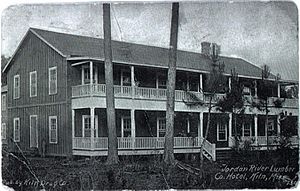 Local folklore includes references to the Kiln being a source of sought after moonshine during the Prohibition era. Stories exist about Al Capone sourcing "Kiln Lightning" from this area and it being known by name in Chicago. One colorful story from the late 1920s relates the destruction of a bridge on highway 43 to thwart Federal agents heading to the area from Picayune. Highway maps from 1925 do show a route labeled 43 that disappears from the 1930 edition of the state highway map.

Kiln is referred to locally as "the Kiln", with the "n" silent.

There were 847 households, out of which 27.4% had children under the age of 18 living with them, 50.3% were married couples living together, 14.5% had a female householder with no husband present, and 29.5% were non-families. 21.6% of all households were made up of individuals, and 6.8% had someone living alone who was 65 years of age or older. The average household size was 2.59 and the average family size was 3.03. 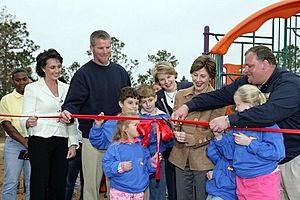 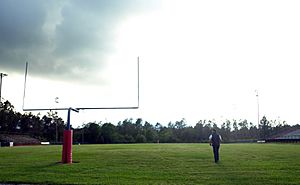 Kiln is served by the Hancock County School District. The town is home to a vocational school, two elementary schools, a middle school, and a high school.

All of Hancock County is in the service area of Pearl River Community College.

All content from Kiddle encyclopedia articles (including the article images and facts) can be freely used under Attribution-ShareAlike license, unless stated otherwise. Cite this article:
Kiln, Mississippi Facts for Kids. Kiddle Encyclopedia.