Dipteris conjugata is a species of fern. It has a rhizome, and 2-3 tall stems with mid green or dark green fronds, which have several divisions to toothed lobes. It is grows in clearings, mountain ridges and in forest margins, from tropical and temperate Asia, Australia and some islands in the Pacific Ocean. It has limited native medicinal uses.

It has a creeping rhizome, covered with black shiny hairs, or reddish brown hairlike scales. The hairs are 4 to 5 mm long and 0.2 mm in diam. The hairs are more like bristles on the older sections of the rhizomes. It is up to 1 cm or more in diameter.

It has Stipes (or stalks) that are between 0.4–2.0 m (1 ft 4 in–6 ft 7 in) tall, which have hairlike scales at base, and then becomes smooth and glabrous. They are stramineous (straw coloured) to brown.

The leaf stems appear at regular intervals along the rhizome. and branch three or four times, with 1 metre wide fronds, or lamina (leaf blades).

The mid green, or dark green fronds, but paler or glaucous underneath. are between 0.5–0.7 m (1 ft 8 in–2 ft 4 in) long and 0.5–0.7 m (1 ft 8 in–2 ft 4 in) wide. They are divided to the base into two spreading fan-shaped halves, which are further divided more than halfway into 4 or more unequal lobes, these lobes are again less deeply lobed once or more times. The ultimate lobes taper to a narrow apex with the edges deeply or coarsely toothed. The main veins are dichotomously branched several times. The veins on the fronds are also dichotomously-branched with 2–4 main veins entering each of the lobes. The juvenile fronds are tomentose (with a layer of downy hairs).

On the lower surface of the fronds, are numerous, small sori (spore producers), they are irregularly scattered and of irregular size and shape. They do not have indusia (umbrella-like covers) and have paraphyses (filament-like support structures) which are club-shaped.

Illustration of the fern from Die Farnkräuter der Erde in 1897

In Fijian, it is known as koukoutangane, or 'aivuiniveli'. In Thailand it is called bua chaek and bua cek in Singapore,

It is written as 双扇蕨 or 破傘蕨, in Chinese script, and known as shuang shan jue in Pidgin in China.

The Latin specific epithet conjugata refers to the leaf having one pair of leaflets. 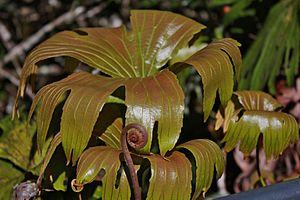 Close-up of the leaf of the fern

It is native to tropical and temperate Asia, Australia and some islands in the Pacific Ocean.

It can be found in temperate Asia, within the Ryukyu Islands of Japan. In tropical Asia, within Papua New Guinea, Cambodia (mainly Kampot), Singapore, Thailand, Vietnam, and Hainan (in China), Taiwan, India, Indonesia, Malaysia (including on the slopes of Mount Ophir,) and in the Philippines. Also within Queensland in Australia, and on the islands of New Caledonia, (of New Zealand) and Fiji.

D. conjugata grows on clay slopes, in clearings, ridges and on forest margins. In East Kalimantan, Indonesia, it grows along rivers together with Nypa Palms. In Borneo, it is found commonly growing with Histiopteris incisa (Thunb.) J. Sm. and Lygodium circinnatum (Burm.) Sw., along forest margins and paths. In New Caledonia, it is found on sunny roadside banks. The fern is also common in forest margins in high rainfall areas.

Dipteris conjugata is listed as Critically Endangered, in the 2008 Singapore Red Data Book. In Labrador Nature Reserve in Singapore, a large historic fern population was decimated, when the reserve was downgraded to a nature park to only a few plants left in 2001. It has also been found in Tanjong Berlayar Park in Singapore.

To help conserve this fern, staff from the National Biodiversity Centre regularly check on the growth of the Dipteris in the Western Water Catchment. Using parangs and secateurs, they prune and clear the plants that may damage the fern, such as the invasive weed, Simpuh Air (Dillenia suffruticosa), the Weeping Fig (Ficus benjamina), and the Resam (fern) (Dicranopteris linearis).

Elsewhere in other areas, at has been assessed as Least Concern (LC), as this species is widespread and not under any known threat. 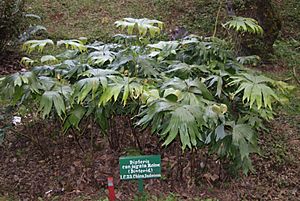 It is sometimes planted as an ornamental plant in Singapore.

It can grown in poor to well drained soils and is mostly disease and pest resistant.

Also specimens of the plant can be found in Cibodas Botanical Garden in West Java of Indonesia, and in the Fernarium of Univerisiti Kebangsaan in Malaysia

It has been used as a medicinal plant to treat various ailments, such as in southern Thailand, the roots have been collected for used in traditional medicine. In Fiji, it is used to treat male reproductive ailments.

It also has another use, in the highlands of Mindanao in the Philippines, the large fronds are used as an umbrella.

All content from Kiddle encyclopedia articles (including the article images and facts) can be freely used under Attribution-ShareAlike license, unless stated otherwise. Cite this article:
Dipteris conjugata Facts for Kids. Kiddle Encyclopedia.