Nypa fruticans, commonly known as the nipa palm (or simply nipa) or mangrove palm, is a species of palm native to the coastlines and estuarine habitats of the Indian and Pacific Oceans. It is the only palm considered adapted to the mangrove biome. This species is the only member of the genus Nypa and the subfamily Nypoideae, forming monotypic taxa. 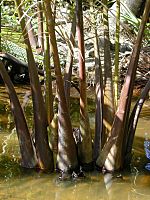 The trunk or stem of the nipa palm is under the mud. Only the leaves project upwards

A globular flower cluster on a nipa palm

The northernmost distribution of Nypa fruticans is seen on Iriomote Island, Japan 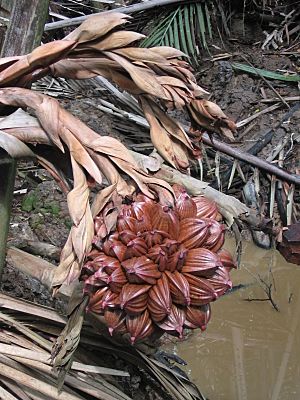 A globular fruit cluster of the nipa palm

The nipa palm's trunk grows beneath the ground and only the leaves and flower stalk grow upwards above the surface. Thus, it is an unusual palm tree, and the leaves can extend up to 9 m (30 ft) in height. The flowers are a globular inflorescence of female flowers at the tip with catkin-like red or yellow male flowers on the lower branches. The flower produces woody nuts arranged in a globular cluster up to 25 cm (10 in) across on a single stalk. The ripe nuts separate from the ball and are floated away on the tide, occasionally germinating while still water-borne.

Nipa palms grow in soft mud and slow-moving tidal and river waters that bring in nutrients. The palm can be found as far inland as the tide can deposit the floating nuts. It is common on coasts and rivers flowing into the Indian and Pacific Oceans, from India to the Pacific Islands. The plant will survive occasional short-term drying of its environment. Despite the name "mangrove palm" and its prevalence in coastal areas, the nipa palm is only moderately salt tolerant and suffers if exposed to pure seawater, and instead prefers the brackish waters of estuaries. It is considered native to China (Hainan region), the Ryukyu Islands, Bangladesh, India, Sri Lanka, the Andaman and Nicobar Islands, Myanmar, Cambodia, Thailand, Vietnam, Borneo, Java, Maluku, Malaya, the Philippines, Sulawesi, Sumatra, the Bismarck Archipelago, New Guinea, the Solomon Islands, the Caroline Islands, Queensland, and the Australian Northern Territory. It is reportedly naturalized in Nigeria, the Society Islands of French Polynesia, the Mariana Islands, Panama, and Trinidad.

Japan's Iriomote Island and its neighboring Uchibanari Island are the most northern limit of the distribution. 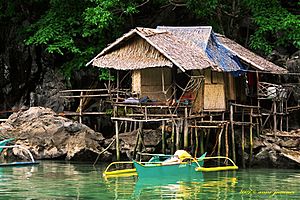 The long, feathery leaves of the nipa palm are used by local populations as roof material for thatched houses or dwellings. The leaves are also used in many types of basketry and thatching. Large stems are used to train swimmers in Burma as it has buoyancy.

On the islands of Roti and Savu, nipa palm sap is fed to pigs during the dry season. This is said to impart a sweet flavour to the meat. The young leaves are used to wrap tobacco for smoking.

In Cambodia, this palm is called cha:k, its leaves are used to cover roofs.

Roof thatching with the leaves occurs in many places in Papua New Guinea, in some coastal areas the rachis is used for walls in houses and the leaflets are used for ornaments. The epidermis of the leaves are used as cigarette papers.

In the Philippines and Malaysia, the flower cluster (inflorescence) can be "tapped" to yield a sweet, edible sap collected to produce a local alcoholic beverage called tuba, bahal, or tuak. A fruit cluster is ready to be tapped when the unripe fruits are at their peak sweetness. The cluster is cut from the stalk about six inches down and mud is rubbed on the stalk to induce sap flow, sap begins flowing immediately if the fruit maturity was correctly gauged. A bamboo tube or a bottle is fitted over the cut stalk and the sap collected twice daily, cutting a half centimeter slice off the end of the stalk after each collection to prevent it from gumming over. Sap flow will continue for 30 days per stalk, and the nipa flowers continuously throughout the year providing a continuous supply of sap.

Tuba can be stored in tapayan (balloon vases) for several weeks to make a kind of vinegar known as sukang paombong in the Philippines and cuka nipah in Malaysia. Tuba can also be distilled to make arrack, locally known as lambanog in Filipino and arak or arak nipah in Indonesian. Young shoots are also edible and the flower petals can be infused to make an aromatic tisane. Attap chee (Chinese: 亞答子; pinyin: yà dá zǐ) (chee meaning "seed" in several Chinese dialects) is a name for the immature fruits—sweet, translucent, gelatinous balls used as a dessert ingredient in Thailand, Malaysia, the Philippines, and Singapore, that are a byproduct of the sap harvesting process.

In Indonesia, especially in Java and Bali, the sap can also be used to make a variant of Jaggery called gula nipah. Also in Sarawak, where it is called gula apong.

In Thailand, leaf is being used for dessert.

In Cambodia, its leaves are used for wrapping cakes (such as num katâm), and the flowers are sometimes used to make sugar, vinegar and alcohol.

The nipa palm produces a very high yield of sugar-rich sap. Fermented into ethanol or butanol, the sap may allow the production of 6,480–20,000 liters per hectare per year of fuel. By contrast sugarcane yields roughly 5200 liters of ethanol per hectare per year and an equivalent area planted in corn (maize) would produce only roughly 4000 liters per hectare per year, before accounting for the energy costs of the cultivation and alcohol extraction. Unlike corn and sugarcane, nipa palm sap requires little if any fossil fuel energy to produce from an established grove, does not require arable land, and can make use of brackish water instead of freshwater resources. Also unlike most energy crops the nipa palm does not detract from food production to make fuel. In fact since nipa fruit is an inevitable byproduct of sap production as a crop it produces both food and fuel simultaneously.

While only one species of Nypa now exists, N. fruticans, with a natural distribution extending from Northern Australia, through the Indonesian Archipelago, the Philippine Islands up to China, the genus Nypa once had a nearly global distribution in the Eocene (56-33.4 million years ago).

Fossil mangrove palm pollen from India has been dated to 70 million years.

Fossil fruits and seeds of Nypa have been described from the Maastrichtian and Danian sediments of the Dakhla Formation of Bir Abu Minqar, South Western Desert, Egypt.

Fossilized nuts of Nypa dating to the Eocene occur in the sandbeds of Branksome, Dorset, and in London Clay on the Isle of Sheppey, Kent, England.

A fossil species, N. australis, has been described from Early Eocene sediments at Macquarie Harbour on the western coast of Tasmania.

Assuming the habitat of extinct Nypa is similar to that of the extant species N. fruticans, the presence of Nypa fossils may indicate monsoonal or at least seasonal rainfall regimes, and is likely indicative of tropical climates. The worldwide distribution of Nypa in the Eocene, especially in deposits from polar latitudes, is supporting evidence that the Eocene was a time of global warmth, prior to the formation of modern polar ice-caps at the end of the Eocene.

All content from Kiddle encyclopedia articles (including the article images and facts) can be freely used under Attribution-ShareAlike license, unless stated otherwise. Cite this article:
Nypa fruticans Facts for Kids. Kiddle Encyclopedia.