The Donald Trump presidential campaign, 2020 was a re-election campaign by President of the United States Donald Trump, who took office on January 20, 2017.

Trump started spending money on the 2020 race on November 24, 2016 (only sixteen days after the end of the 2016 election). On January 10, 2017, Politico reported that Trump would be keeping his campaign offices in Trump Tower open in order to lay the groundwork for a re-election campaign. On January 18, Trump revealed in an interview with The Washington Post that he had decided on Keep America Great as his 2020 campaign slogan.

Trump launched his reelection campaign significantly earlier in his presidency than his predecessors did. Barack Obama, George W. Bush, Bill Clinton, George H. W. Bush and Ronald Reagan all declared their candidacies for reelection in the third year of their presidencies.

Election Day and beyond 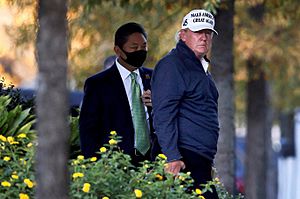 On November 7, 2020, Trump returns to the White House after golfing, finding a crowd cheering for his apparent loss against Joe Biden.

Early on November 4, despite the fact that no clear winner of the election had been determined, Trump declared victory from the White House, stating that he "did win the election". At that point, results from states such as Pennsylvania, Wisconsin, Michigan and Georgia were unclear. Although Trump was leading in the vote count of those states at the time, experts believed that many of the still-uncounted votes—which included votes from large cities and mail-in ballots—would turn out to favor Biden.

By November 6, a growing number of Trump officials had admitted that the incumbent's loss was probable. On that day, election-calling organization Decision Desk HQ forecast that Trump had lost the election to Biden.

The first rally paid for by the campaign was held on February 18, 2017, in Melbourne, Florida, and was attended by an estimated 9,000 supporters.

The campaign's second rally was held a month later in Nashville, Tennessee on March 15, and it was the 250th birthday of Andrew Jackson. Before the rally, Trump paid tribute to Jackson and laid a wreath at his tomb. A third rally was held by the campaign in Louisville on March 20, days after Trump fired FBI Director James Comey.

Trump held his fourth campaign rally with Vice President Mike Pence on April 29 in Harrisburg, Pennsylvania on the 100th day of Trump's presidency.

In June, Trump began campaigning in Iowa. Iowa is considered to be a perennial swing state. Trump held his sixth campaign rally on July 25 at the Covelli Centre in Youngstown, Ohio.

Trump held his eighth campaign rally on August 22 at the Phoenix Convention Center in Phoenix, Arizona.

Amidst the COVID-19 pandemic, Donald Trump held a rally in Tulsa, Oklahoma. The rally was notable for a surprisingly low turnout . However the rally managed to reach 6.7 million views online according to fox news it stated that this rally was its highest Saturday primetime viewership in network history.

All content from Kiddle encyclopedia articles (including the article images and facts) can be freely used under Attribution-ShareAlike license, unless stated otherwise. Cite this article:
Donald Trump 2020 presidential campaign Facts for Kids. Kiddle Encyclopedia.