Douglaston is located on the North Shore of Long Island, bordered to the east by Little Neck, and to the west by Bayside. Douglaston's two ZIP Codes are 11362 and 11363.

Douglaston represents one of the least traditionally urban communities in New York City, with many areas (particularly those north of Northern Boulevard) having a distinctly upscale suburban feel, similar to that of Nassau County towns located nearby (such as Great Neck).

The area is also known for its historical society and other civic groups, notably the Douglaston Civic Association and the Douglas Manor Association. 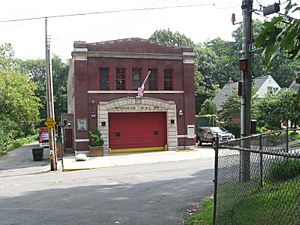 The earliest known residents of the area that would become Douglaston were the Matinecock Native Americans. Early Dutch settlers were drawn to the area by the rich land and abundant fishing. Thomas Hicks settled the area in 1656 on a peninsula first called Little Madnan's Neck. In 1796, his estate passed to Thomas Wickes (1770–1854), and in 1819, to Wyant Van Zandt, a wealthy merchant, who built a large Greek Revival mansion in the area. Today, this mansion houses the Douglaston Club, a private club with tennis courts, social activities and swimming pools. In 1835, George Douglas bought 240 acres (0.97 km2) of land along with Van Zandt's mansion. Upon Douglas' death in 1862, the land was inherited by his son, William Douglas. Four years later, the North Shore Railroad extended its service to the area. William Douglas donated an outbuilding for use as the station house, and in thanks, the railroad named its new stop "Douglaston", which soon was taken on as the name of the community.

Douglaston Hill is the oldest area of the community, and is characterized by turn-of-the-20th-century homes in Queen Anne and Victorian styles. It was laid out with very large lots in 1853, at the very beginning of a movement in the United States to create suburban gardens. The area was recognized as a New York City Historic District in December 2004 by the New York City Landmarks Preservation Commission. The Douglaston Hill Historic District was listed on the National Register of Historic Places in 2000.

In the early 20th century, the Rickert-Finlay Realty Company of Manhattan purchased 175 acres (0.71 km2) of the Douglas' family holdings, and formed the Douglas Manor Association, creating a planned community. Many of the houses in this area were built in architectural styles popular at the time, such as Tudor, Mediterranean, Colonial Revival, and Arts and Crafts. In 1997, New York City's Landmarks Preservation Commission designated Douglas Manor as the Douglaston Historic District, ensuring that no new buildings or external alterations could be made without the commission's approval. The Douglaston Historic District was listed on the National Register of Historic Places in 2005.

Other areas of Douglaston were developed during the latter half of the 20th century. Douglaston Park contains a mixture of large, older homes as well as Capes, Tudors, and ranch-style homes dating from the 1960s. The areas adjacent to the Douglaston Shopping Center are occupied mainly by attached single-family homes built in the early-1970s, as well as four-story condominiums added in the mid-1980s. 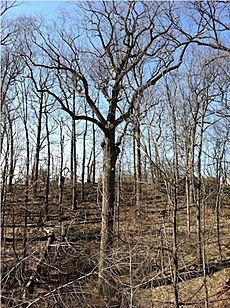 The Queens Giant measures 133.8 feet (40.8 m) tall and is probably the oldest living thing in the New York metropolitan area.

Several parks are under the administration of the New York City Department of Parks and Recreation. To the west of Douglaston along the waterfront is Alley Pond Park, a 635-acre (2.57 km2) wildlife and bird sanctuary, and home to the Queens Giant, the oldest known tree (and living thing) in New York City. To the east along the water is Udalls Cove, a 90-acre (360,000 m2) wildlife sanctuary.

Because northern Douglaston is surrounded by water, many residents take advantage of the waterfront. The Douglaston Yacht Squadron is the local yacht club (there is also a junior yachting program called the djys, which teaches youngsters under the age of 16 years how to sail). It is a part of the Douglaston Club, a country club based in Van Zandt's original mansion in Douglas Manor. The Douglaston Club is also site of various community events, such as the Douglaston Chess Congress' annual championships, which decides the community's best players. Sailing is also a popular sport in the community.

Southern Douglaston has an 18-hole, par 67 golf course. Formerly known as the North Hills Country Club, the 104-acre (0.42 km2) course opened in 1927 and became a municipal course in the 1960s. The Douglaston Golf Course underwent significant renovations in 2004. The course is situated at one of the highest points in the borough of Queens, providing picturesque views of the Manhattan skyline, and has a restaurant.

A local volunteer ambulance corps, the Little Neck–Douglaston Community Ambulance Corps is supported and run by people in the community. It also hosts blood drives and classes to teach the community CPR for free.

Based on data from the 2010 United States Census, the population of Douglaston was 24,739. 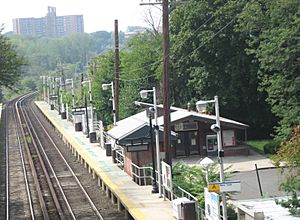 The LIRR station, looking west from the Douglaston Parkway overpass

The Douglaston Long Island Rail Road station, at 235th Street and 41st Avenue, is on the LIRR's Port Washington Branch.

Scenes from the movies Black Rain, American Gangster, Little Children, The Arrangement, I Never Sang for My Father, Cops and Robbers, and After-Life were filmed in the community. The films Rabbit Hole (2010), Son of No One (2011), and Run All Night (2014) were also shot in Douglaston.

In the 30 Rock episode "Hiatus", the community stood in for Needmore, Pennsylvania. Mary Hudson, a character in "The Laughing Man", a short story by J. D. Salinger, is from this community. "Machine", the masked character from the 1999 film 8mm, also lived with his mother in Douglaston.

All content from Kiddle encyclopedia articles (including the article images and facts) can be freely used under Attribution-ShareAlike license, unless stated otherwise. Cite this article:
Douglaston, Queens Facts for Kids. Kiddle Encyclopedia.