Downe is a village in Greater London within the London Borough of Bromley. It is also in the historic county of Kent.

Downe is 3.4 miles (5.5 km) south west of Orpington and 14.2 miles (22.9 km) south east of Charing Cross. Downe lies on a hill, and much of the centre of the village is unchanged; the former village school now acts as the village hall. The word Downe originates from the Anglosaxon word doon, latterly down, hence the South and North Downs. The village was part of Kent until April 1965 when it (and the remaining part of Orpington Urban District Council) was subsumed into the new London Borough of Bromley.

When Charles Darwin moved there in 1842, the village was known as Down. Its name was changed later to Downe.

Charles Darwin lived in Down House for 40 years, from 1842 until he died there in 1882. A favourite place of his was Downe Bank, now a nature reserve and Site of Special Scientific Interest, and several members of his family are buried in the graveyard of St Mary's Church.

Down House and the surrounding area has been nominated by the Department of Culture, Media and Sport to become a World Heritage Site. However, this decision has been deferred. 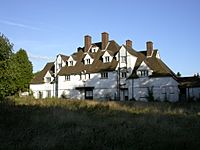 Downe is the location of Buckston Browne Farm, built in 1931 as a surgical research centre by the Royal College of Surgeons (RCS). In the 1980s, the farm caused controversy because of its use of vivisection techniques, and in August 1984 it was raided by anti-vivisection activists.

The farm has now been made into four houses.

There are two scout campsites in the Downe area:

Despite being within Greater London, Downe has limited connections to the rest of the city. There are no rail links to the village, but it is served by two hourly bus routes:

The nearest railway stations are:

All content from Kiddle encyclopedia articles (including the article images and facts) can be freely used under Attribution-ShareAlike license, unless stated otherwise. Cite this article:
Downe Facts for Kids. Kiddle Encyclopedia.