ENAC Alumni (also referred to as INGENAC) is an alumni association based in Toulouse, Midi-Pyrénées. It was started by Robert Aladenyse, in 1987. The main mission of the association is to gather the alumni of the French Civil Aviation University. In 2013, it has almost 20,000 members. It is a non-profit organization.

When the French Civil Aviation University was created in 1949, its first goal was to train people of the Directorate General for Civil Aviation. At the beginning of the 1970s, the university started to train professionals for the aerospace engineering industry. Robert Aladenyse (1931-2003, graduated in 1964) decided in 1987 to create a non-profit organization for alumni called INGENAC. In the 2000s, the development in France of Master's degree and Mastères Spécialisés courses encouraged the association to support and represent these new alumni.

On 1 Janunary 2010, ENAC became the biggest aeronautical university in Europe. Because of this, INGENAC decided to rename itself ENAC Alumni and gather graduates of all the degrees of the French Civil Aviation University (including the Techniciens aéronautique d'exploitation, the Techniciens supérieur de l'aviation, the Air Traffic Safety Electronics Personnels and the Ingénieurs des études et de l'exploitation de l'aviation civile). It has been done in March 2012.

ENAC Alumni is part of the Conférence des Grandes Écoles. 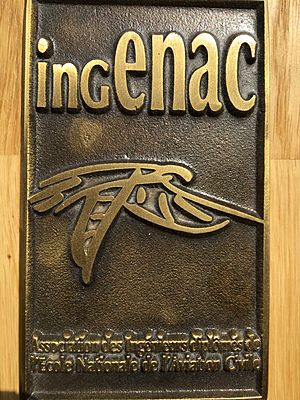 ENAC Alumni is a partnership of the yearly meeting Airexpo and the Salon du livre aéronautique.

Méziane Idjerouidène was one of the board members of the association. Marc Houalla is the current President.

All content from Kiddle encyclopedia articles (including the article images and facts) can be freely used under Attribution-ShareAlike license, unless stated otherwise. Cite this article:
ENAC Alumni Facts for Kids. Kiddle Encyclopedia.