East Germany at the Olympics facts for kids 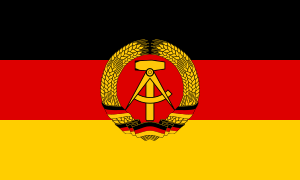 The German Democratic Republic (GDR), or East Germany, sent athletes to the Olympic Games from 1956 until 1988. They have taken part in both the Summer and Winter Games. From 1956 through 1966, East German athletes were a part of a combined team from both East and West Germany. After 1966, the East Germans were a separate team. They won a total of 519 medals at the Olympics.

Germany was divided after World War II. Three separate states were created. German athletes tried to take part in the 1948 games but the Allies did not let this happen. Finally, in 1949, the National Olympic Committee for Germany was founded in the Western Federal Republic of Germany. The IOC accepted it as both of the larger two larger German states. The small, French-occupied Saarland and its NOC were separate until after 1955.

East German authorities of the Nationales Olympisches Komitee für Ostdeutschland did not send their athletes to the 1952 games in an all-German team. The wanted a team of their own. This was not allowed by the IOC.

East Germany agreed to take part in the 1956 Games. German athletes from the East and West Germany took part in the games in 1956, 1960 and 1964 as the United Team of Germany. This team was just called Germany at the time.

The GDR renamed their NOC to Nationales Olympisches Komitee der DDR in 1965. It was accepted by the IOC in 1968. At this point East Germany sent its own team to the Games. They did not take part in the in 1984 Summer Olympics due to the Soviet boycott.

Although East Germany had a small population of about 16 million, they did very well. From 1976 to 1988, they won the second most medals in each of their three summer Olympics, behind the Soviet Union. They did much better than the West Germany. In five winter games, they placed second four times and first in the 1984 Winter Olympics.

Many think that doping (mainly anabolic steroids) allowed East Germany to a world leader in sports for two decades. They won many Olympic and world gold medals but many athletes failed doping tests or were believed to be taking performance enhancing drugs. In many cases where doping was believed to happen, no proof was found so most of records and medals won by East German athletes still stand. Aside from doping, East Germany soent a lot of money on sporta - mainly Olympic sports. They did this for prestige, propaganda and rivalry with West Germany. The government did a lot of work to find and train athletes and coaches that they believed would do very well. This made it hard say that it was doping rather than very good performance that was the reason for them winning so much.

In 1990, the German reformed back into Germany. The "NOC of the GDR" joined the "NOC of Germany" on 17 November 1990. The German athletes took part in the Olympic Games in a single team again from 1992 forward. During the first decade after this, athletes from the Eastern part of Germany still won many of Germany's medals. This shows that doping was not the only reason East Germany did so well in the Olympics. It shows that their training conditions were also very important. As trainers and athletes started to move freely around the country, this difference between east and west became smaller.

All content from Kiddle encyclopedia articles (including the article images and facts) can be freely used under Attribution-ShareAlike license, unless stated otherwise. Cite this article:
East Germany at the Olympics Facts for Kids. Kiddle Encyclopedia.