Kids Encyclopedia Facts
This page is about the settlement in West Sussex, England. For other uses, see Wittering. 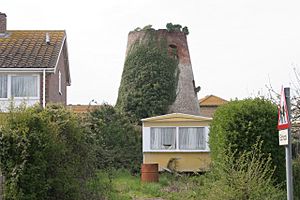 There has been a settlement at East Wittering for over a thousand years. The Witterings were included in a grant of land to Bishop Wilfrid in the late 7th century. The area is mentioned in the Domesday Book, as part of the Hundred of Westringes (later Manhood). The Witterings together with Sidlesham were rated as 36 hides at the time of Edward the Confessor. For centuries the manor of East Wittering was in the hands of the Wystryng family, who took their name from the place.

The former 12th-century Anglican parish Church of the Assumption of St Mary the Virgin, has been replaced by the more modern St Anne's Church. St Anne's was built in the village centre during the 1950s, and the old church declared redundant in 1983.

In Victorian times the RNLI raised enough subscriptions to launch a distress boat from the beach at East Wittering, a role now covered by the Fire Service. Last century the area began to attract greater numbers of holiday makers but in May 1944 it became the landing beach for the 3rd Canadian Infantry Division during a dummy run for D-Day, code named Operation Fabius.

Since then it has returned to a quiet area with a small primary school, popular with week-end surfers. Nikolaus Pevsner described the village as "a jumble of bungalows and chalets near the beach in an untidy half grown up state". St Anne's Anglican Church was designed by architect Harry Sherwood who was surveyor of the fabric of Chichester Cathedral. The foundation stone was laid on 6 June 1958. The Bishop of Chichester consecrated the church on 14 May 1959. There is a plaque inside with the inscription, 1914-1918 No lives were lost from this Parish. All returned safely. LAUS DEO which testifies to the fact that East Wittering is one of the Thankful Villages - those very rare places that suffered no fatalities during the Great War of 1914–1918.

The whole stretch of Bracklesham Bay is a popular one with many surfers. With a low beach gradient and the lack of any obvious dangers such as rips or obstacles it is a great beach for learners and with one of the UK's longest running surf clubs, Shore Surf Club.

An electoral ward of the same name exists. The ward includes surrounding areas. At the 2011 census it had a total ward population of 5,117.

East Wittering is most directly reached via the A286 road from Chichester to Birdham followed by the B2198 road to Bracklesham before taking the B2179 road. Alternatively the B2179 can be taken in the opposite direction from Birdham for a slightly longer route via West Wittering. The B2179 road skirts the centre of the village which lies on Cakeham Road.

East Wittering is served by a high frequency bus service from Chichester and Birdham passing alternatively clockwise and counter-clockwise round the Birdham, Bracklesham, East Wittering and West Wittering road loop formed by the B2198 and B2179 roads.

All content from Kiddle encyclopedia articles (including the article images and facts) can be freely used under Attribution-ShareAlike license, unless stated otherwise. Cite this article:
East Wittering Facts for Kids. Kiddle Encyclopedia.