Elvington is a village and civil parish situated approximately 7 miles (11 km) south-east of York, England, on the B1228 York-Howden road. According to the 2001 census the parish had a population of 1,212, increasing slightly to 1,239 at the 2011 Census. The River Derwent forms part of the parish boundary and an ancient stone bridge connects Elvington with Sutton upon Derwent. The village has three separate large industrial estates including a site for Yara International, a Norwegian chemical company.

The village is mentioned in the Domesday Book, which states that in 1066 Ulfketill had six carucates of land taxable, where three ploughs were possible. There is in 1086 a further mention of the church, which is Norman in origin and exists in part today.

Richard Neville, 16th Earl of Warwick, was in control of the manor until his death. In the village there is the Grade II* listed Elvington Hall. Built during Elizabethan times, it was remodelled in the 18th century by John Carr; famous writer Laurence Sterne lived there for a period of his childhood; Roger Jacques and Simone Sterne, his grandparents, controlled the manor before 1700.

The town was once the home of the Scottish author and screenwriter, Hugo Charteris, who died of cancer in 1970 at his home in the village.

Between 1913 and 1926 Elvington was served by a passenger service on the Derwent Valley Light Railway. The line was open for freight traffic until 1973.

During 1942, the airfield RAF Elvington was built; it was used in the Second World War. The airfield was vacated in 1958 and by May 1986 parts of it were turned into the Yorkshire Air Museum, open to the general public. The airfield still had the status of a relief landing ground until September 1992. It is now used for motorsports and an airshow. 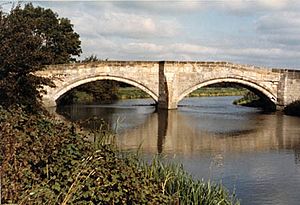 Elvington was made a Conservation Area in 1990.

The Grey Horse Inn is a public house located in the centre of the village. The village also has a church, shop, primary school, and sports field. There are a number of organised clubs and societies operating within the village, including drama, Scouts, various sewing groups, a youth group, a toddler group and playgroup.

Elvington has one of the most unusual homes in Britain. In 2006, a derelict bowling alley was converted into a private home whilst still incorporating a 55-foot-long (17 m) bowling lane. The original bowling alley was built in the 1950s for US troops stationed at RAF Elvington and it was a regular meeting place for members of Strategic Air Command.

Elvington is also home to the turf growers Rolawn who are one of Europe's largest companies of its kind.

Founded in 1999, Elvington Harriers Football Club is a strong community organisation and is an FA Charter Standard Club. The football club has age groups from the 'Saturday Morning Club' and Under-7's through to Under-15's. Each age group team plays in the Club's traditional yellow shirts and blue shorts and the Club's teams play in the Selby District League where they have a strong track record. The Club's home games for each age-group are played in Elvington at the Lower Derwent Sports & Social Club. The Club finances itself through player subscriptions and various fund-raising activities. It is also hopeful of further grant funding through the Football Association, Sport England or the Lottery Fund.

The Yorkshire Air Museum is based at Elvington Airfield, a former Second World War bomber station. The main runway was expanded in the Cold War era to become one of the longest in Europe, which enabled it to accept large American bombers such as the B52. The Yorkshire Airshow, the largest airshow in the North of England, was held here annually (now bi-annually) during August.

The airfield has a large race track, which is frequently used for drag racing and other motorsport events. In November 1966, Italian motor scooter rider Alberto Ancillotti on his Lambretta bike established the 106 mph terminal speed record at this venue.

In the 1970s the airfield was the outdoor location for a series of Oh No, It's Selwyn Froggitt!, a situation comedy on British television. On 20 September 2006, the airfield also played host to television's Richard Hammond and his near-fatal drive in the Vampire Dragster; contrary to some reports at the time, this was not an attempt at the British land speed record.

All content from Kiddle encyclopedia articles (including the article images and facts) can be freely used under Attribution-ShareAlike license, unless stated otherwise. Cite this article:
Elvington, City of York Facts for Kids. Kiddle Encyclopedia.