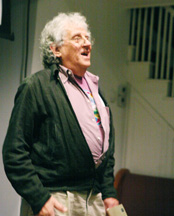 Salzman studied at Columbia University, Princeton University, and also in Italy and Germany.

He was known for his work advancing the concept of "New Music Theater" as an independent art form. He co-founded the American Music Theater Festival and was, at the time of his death in 2017, Composer-in-Residence at the Center for Contemporary Opera in New York City.

All content from Kiddle encyclopedia articles (including the article images and facts) can be freely used under Attribution-ShareAlike license, unless stated otherwise. Cite this article:
Eric Salzman Facts for Kids. Kiddle Encyclopedia.