Erskine is a city in Polk County, Minnesota. The population was 503 at the time of the 2010 census. It is part of the Greater Grand Forks region.

Erskine was laid out in 1889, and named for John Quincy Erskine, a Minnesota banker. A post office has been in operation at Erskine since 1889.

There were 234 households, of which 27.4% had children under the age of 18 living with them, 37.6% were married couples living together, 11.1% had a female householder with no husband present, 7.3% had a male householder with no wife present, and 44.0% were non-families. 41.0% of all households were made up of individuals, and 24% had someone living alone who was 65 years of age or older. The average household size was 2.15 and the average family size was 2.88. 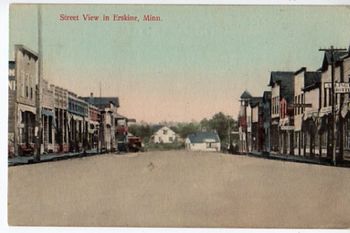 Erskine's town festival is known as the Erskine Water Carnival, and is held in early June. The Erskine Fish, the concrete statue that is the world's largest Northern Pike and the town's principal tourist attraction, is located on a grassy lawn in a small park on the shore of Cameron Lake, just down the street from downtown Erskine. It is the hometown of actress and singer Jamie Foss, winner of 2004's Superstar USA. In addition, it is the center of a community of Russian Old Believers estimated at between 50 and 100 families. The Old Believers began moving to Erskine around 1998 in order to escape a farming crisis and suburban sprawl which threatened their community near Woodburn, Oregon.

The Rydell National Wildlife Refuge is located along County Road 238 approximately 3 miles (4.8 km) west of Erskine and 2½ miles south of U.S. Highway 2. The Oak Lake Golf Course is located just east of town at the intersection of Highway 2 and U.S. Highway 59. The best local resort and fishing areas are Maple Lake, a lake near Mentor, Minnesota, and Maple Bay, Minnesota, as well as Union Lake and Lake Sarah, located a few miles south of Erskine. Like many other lakes in other towns, Erskine's sewage was dumped into Cameron Lake until the Clean Water Act of 1970 forced the town to redirect its sewage to the new sewer plant near Badger Lake. Former residents and old-timers will recall that the shores of Cameron Lake were littered with dead fish in the old days. Today, the lake is much cleaner, and with the rising costs of lakeshore property in the area, there is an increase in development on the lakeshore.

The nearest airports with commercial service are Bemidji (55 miles (89 km) east), Thief River Falls (35 miles (56 km) north) and Grand Forks (60 miles (97 km) west). An uninstrumented grass airfield known as the Erskine Airport was in operation from 1954 until the early 1970s, but no longer exists. Nearby Fosston (12 miles (19 km) east) and Crookston (20 miles (32 km) west) both have private aviation airfields.

Located at the historic junction of the Great Northern Railway and the Soo Line Railroad, Erskine formerly appeared prominently on many national railroad maps and atlases which omitted much larger cities and towns in the vicinity. Both lines are still in place today, with the Great Northern tracks now owned by the BNSF Railway and the Soo Line tracks owned by the Canadian Pacific Railway. Erskine's freight depot, while still standing, is closed for business, and rail passenger service was discontinued many years ago.

Greyhound Bus Lines no longer serves Erskine, but Jefferson Lines has taken over the Fargo-Minneapolis route previously served by Greyhound. The Tri-Valley Heartland Express Bus provides scheduled weekly or bi-weekly service to Crookston, Bemidji, Thief River Falls and other destinations for seniors and others on an advance reservation basis.

All content from Kiddle encyclopedia articles (including the article images and facts) can be freely used under Attribution-ShareAlike license, unless stated otherwise. Cite this article:
Erskine, Minnesota Facts for Kids. Kiddle Encyclopedia.