Erskineville is an inner-city suburb of Sydney, in the state of New South Wales, Australia. It is located 6 kilometres south west of the Sydney central business district and is part of the local government area of the City of Sydney. Erskineville is a diverse suburb homing to a wide variety of ethnicity from its varying Southeast Europe and Aboriginal community. Erskineville is colloquially known as Erko.

Erskineville is bordered by the suburbs of Newtown to the west, Redfern to the north, St Peters to the south, and Alexandria to the east. The locality of Macdonaldtown sits over the north-west border.

Erskineville is a residential suburb. Erskineville Oval is located on the eastern border of the suburb. 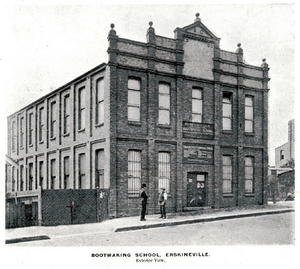 The suburb was originally called after an earlier subdivision in 1846 in the south of Erskineville owned by Stephen Macdonald. The streets around the early Macdonaldtown subdivision are named after relations of the Macdonald family - Amy, Flora, Eve, Coulson and Rochford. Knight Street is named for Henry Knight, one of the earliest brickmakers in the district and the first mayor of Macdonaldtown. Devine Street is named for the first grant holder, Nicholas Devine, the first principal superintendent of convicts. He called his property Burren Farm, after a region of County Clare in his native Ireland.

Erskineville is named after Erskine Villa, the home of Wesleyan minister, Reverend George Erskine, built in 1830. After changing owners a few times, the property was eventually left to the Church of England and became the rectory for the Holy Trinity Church at Macdonaldtown (it was demolished in 1961 after serving as the rectory for eighty years).

In 1893 Macdonaldtown was renamed as the Borough of Erskineville. In the late nineteenth century, the inhabitants were originally market gardeners, though brick making and tanning also became dominant industries. The Victorian cottages and small rows of Victorian terraces that dominate the built form of the suburb were the homes of the workers in these industries, which explains their smallness: a four-metre wide terrace is large by Erskineville standards. 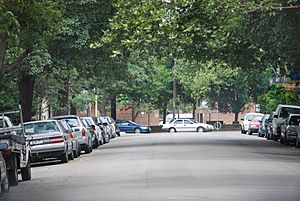 In the early twentieth century, manufacturing in the area diversified, and Erskineville became a resolutely working class inner city suburb, with a proud history of resistance, and a less proud history of street violence. After World War II, Greek and Macedonian migrants found it an affordable place to settle, near the city.

From the 1970s, Erskineville underwent gentrification with new residents attracted to the village atmosphere, the excellent public transport links (three railway stations on two different lines within walking distance) and the proximity to Newtown. The gay and lesbian community were part of the first wave of gentrification and are still a component of the community. As the terrace houses were renovated, the narrow streets which were previously cobbled were covered in bitumen and speed-bumped and an urban forest of plantings grew in the streets and pocket parks.

Tram at the Erskineville terminus

A C3765 train at Erskineville Station.

The Erskineville line opened as an electric double track tramway in 1909. It branched from tracks at Regent Street in Chippendale, and passed west along Meagher Street, then south into Abercombie Street. It followed Abercrombie Street south across the junction with Cleveland Street through Golden Grove, before swinging south into Golden Grove Street then right into Wilson Street. The line then passed under the railway lines at Burren Street, adjacent to the entrance to Macdonaldtown railway station. The line then became a single track loop passing up Burren Street to Erskineville Road, then west along Erskineville Road to Septimus Street, then Albert Street before rejoining the tracks at Burren Street. Services operated from Circular Quay using the Pitt and Castlereagh Street lines. The line south of [Cleveland Street closed in 1940, with the northern section used by other services until its closure in 1958.

The Henderson Road line was a short line that branched from the Alexandria line tracks at the corner of Henderson and Mitchell Roads in Alexandria and passed along Henderson Road to Park Street in Erskineville, and later to Bridge Street adjacent to Erskineville railway station. Services operated from Circular Quay with the line opening to Park Street in 1906 and to Bridge Street in 1909. The line was an electrified single track throughout. The line was an early closure in 1933 and was replaced by a private bus service that no longer operates.

At the 2011 census, there were 6,848 residents in Erskineville. 36.1% of people were born outside of Australia, with top countries of birth being England 6.7%, New Zealand 4.3% and Ireland 1.6%. The most common responses for religious affiliation were No Religion 45.2%, Catholic 20.4% and Anglican 10.6%. There was a high level of public transport use, with 40.8% of people travelling to work by bus or train. The main housing types were flats or units 53% and semi-detached or townhouses 41.8%. Just over half of residents (50.9%) were renting, compared with the national average of 29.6%. 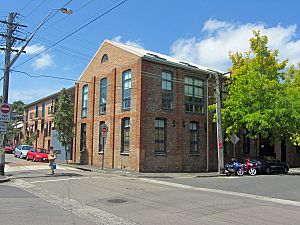 A converted factory in Erskineville.

There are two schools within Erskineville itself, both catering for the primary-level (K–6):

In addition, Erskineville is serviced by several public secondary schools. The suburb itself is within the catchment-area of the Newtown High School of the Performing Arts, while Alexandria Park Community School (K–12), Marrickville High School and Tempe High School are the closest comprehensives.

All content from Kiddle encyclopedia articles (including the article images and facts) can be freely used under Attribution-ShareAlike license, unless stated otherwise. Cite this article:
Erskineville, New South Wales Facts for Kids. Kiddle Encyclopedia.