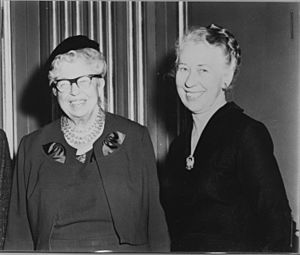 Esther Eggertsen grew up in a Mormon family in Provo, Utah. She graduated from Brigham Young University in 1927 with a degree in physical education. She obtained master's degree from Teachers' College, Columbia University, in 1930. She held several teaching positions during the 1930s. She taught at Bryn Mawr College Summer School for Women Workers in Industry. The school brought milliners, telephone operators and garment workers onto the campus. She later moved to New York City where she married Oliver Peterson. In 1932, the two moved to Boston, where she taught at the Winsor School and volunteered at the YWCA. Peterson was a Latter-day Saint.

In 1938, Peterson became a paid organizer for the American Federation of Teachers. In her job she traveled around New England. In 1944, Peterson became the first lobbyist for the National Labor Relations Board in Washington, D.C. In 1948, the United States Department of State offered Peterson’s husband a position as a diplomat in Sweden. The family returned to Washington D.C., in 1957. Peterson joined the Industrial Union Department of the AFL-CIO, becoming its first woman lobbyist. 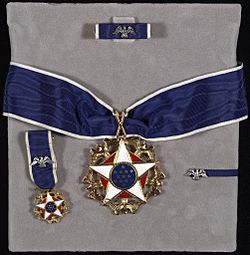 The Presidential Medal of Freedom Badge and components

She received the Presidential Medal of Freedom in 1981. Peterson was named a delegate to the United Nations as a UNESCO representative in 1993. In 2013, Esther Peterson was inducted into the US Department of Labor's Hall of Honor.

All content from Kiddle encyclopedia articles (including the article images and facts) can be freely used under Attribution-ShareAlike license, unless stated otherwise. Cite this article:
Esther Peterson Facts for Kids. Kiddle Encyclopedia.