Eustreptospondylus (meaning "well-reversed vertebrae") was a megalosaurid tetanuran theropod (a large, bipedal meat-eater) about 23-30 ft (7-9 m) long, weighing about 440-550 pounds (200 kg to 250 kg). This predator had a large head, long, sharp serrated teeth, short arms and a primitive hip structure. It lived during the mid-Jurassic period, about 165 million years ago. Incomplete fossils have been found in England.

Eustreptospondylus feeding on an ichthyosaur

The main specimen of Eustreptospondylus was not fully grown, and according to an estimate by Paul in 1988 was about 4.63 metres (15.2 ft) long and weighed about 218 kilograms (481 lb). Various estimates suggest that Eustreptospondylus was an "average-sized" theropod, with a hypothetical adult length of around 6 metres (20 ft), and a mass of 0.5 tonnes (0.49 long tons; 0.55 short tons).

The skull of Streptospondylus has a rather pointed snout in side view, with a large horizontally oriented nostril. There is no lacrimal horn. The skull roof is relatively thick. Oblique grooves in the jaw joints caused the gape of the mouth to be widened when the lower jaws were opened. These jaws at the front are rather tall and wide. No teeth have been preserved in either the upper or lower jaws, but the size of its toothsockets proves that the third tooth of the lower jaw was enlarged. Though not keeled, the front dorsal vertebrae have paired hypapophyses at their undersides, just as with Streptospondylus altdorfensis.

Sadleir et al. (2008) established several traits that distinguish Eustreptospondylus from its direct relatives. In the corner of the lacrimal a shallow depression is present, which is pierced by a smaller foramen. The descending branch of the postorbital has a groove in its outer rear corner. The outer side of the squamosal has a well-developed drooping flange covering, in side view, the upper rear part of the lateral temporal fenestra. The tenth neck vertebra has a clear depression on its front underside. The neck and dorsal vertebrae are not keeled. In 2012 Matthew Carrano added to these traits. The peduncle of the ilium to which the pubic bone is attached, is as transversely wide as it is long from front to rear. With the rear blade of the ilium, the lower edge of the outer blade side is turned upwards to an almost horizontal position, creating and denuding over its total length a bone surface, the "brevis shelf", forming the internal face of the inner blade side — this shelf with dinosaurs functions as an attachment area for a tail muscle, the Musculus caudofemoralis brevis.

Sadleir also found additional traits proving that Eustreptospondylus differed from Magnosaurus nethercombensis in more than a single detail. The interdental plates reinforcing the back of the teeth are longer from front to rear than they are tall; with M. nethercombensis the opposite is true. Seen from above, the pubic bone forms transversely a more narrow part of the lower rim of the hip joint. Seen from behind, the upper part of the inner side of the thighbone is straight. The cnemial crest of the upper shinbone has no ridge running to the front and below, on its outer side. 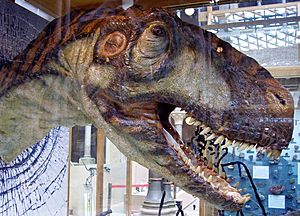 Eustreptospondylus, like many other theropods, fed on smaller dinosaurs and pterosaurs, or scavenged the carcasses of fishes, marine reptiles, and other dinosaurs. It might have foraged on shorelines for carcasses and marine life.

Eustreptospondylus is known from a fossil from on an island, at a time when Europe was mostly made up of island series. This suggests that it might have been able to swim short distances. Eustreptospondylus has been considered a good swimmer, strong enough to swim from island to island like the modern day Komodo dragon. Not all palaeontologists agree with the swimming hypothesis. The opposing theories hold that the fossil of Eustreptospondylus was either swept out to sea during a flood after the animal died on the mainland, or it was carried to the ocean after it died in a river.

All content from Kiddle encyclopedia articles (including the article images and facts) can be freely used under Attribution-ShareAlike license, unless stated otherwise. Cite this article:
Eustreptospondylus Facts for Kids. Kiddle Encyclopedia.