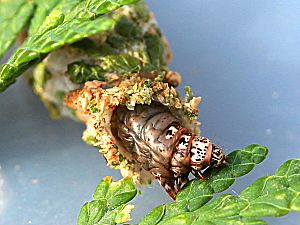 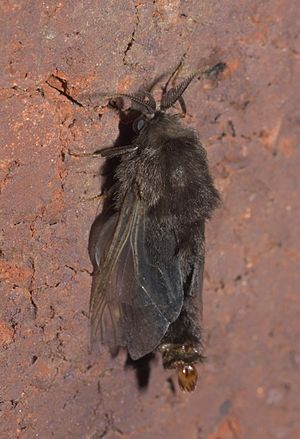 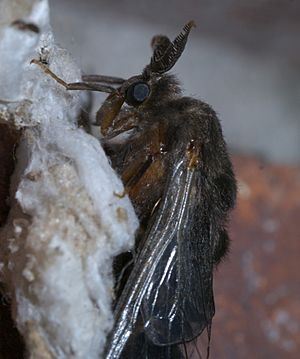 The evergreen bagworm (Thyridopteryx ephemeraeformis), commonly known as bagworm, eastern bagworm, common bagworm, common basket worm, or North American bagworm, is a moth that spins its cocoon in its larval life, decorating it with bits of plant material from the trees on which it feeds.

The evergreen bagworm's case grows to a length of over 6 cm, tapered and open on both ends. Newborn larva are blackish and turn brown to tan as they grow, mottled with black. The heads and thorax develop a yellow tint as they grow to a full length of 24 to 32 mm. Adult males resemble bees, having a 25 mm wingspan with transparent wings (thuris window + pterux wing) and black furry bodies. Adult females are maggot-like with yellowish-white soft bodies 19 to 23 mm long and small tufts of hair near the end of the abdomen. The cream-colored eggs are 0.75 mm in diameter.

The evergreen bagworm thrives in the eastern United States as far west as Nebraska, north into New England and bordering the Gulf of Mexico south throughout Texas. It has been found in other countries, such as South Africa, Croatia, and in the north-east of Iran. Large populations in forested areas are rare. With scarce predators in urban areas, evergreen bagworms often thrive in urban habitats. When disturbed, the larva will retract its head into its case and hold the front opening closed. Mature larva may remain in the host tree or drag its case nearby before attaching itself for the pupa stage.

Bagworms are commonly parasitized by ichneumonid wasps, notably Itoplectis conquisitor. Predators include vespid wasps and hornets. Woodpeckers and sapsuckers can feed on the larva from their cases.

Eggs hatch from early April to early June (earlier in the south) and larvae emerge from the carcass of their mother in her case. Newborn larva emerge from the bottom of the hanging case and drop down on a strand of silk. The wind often blows the larva to nearby plants where it begins its new case from silk and fecal material before beginning to add leaves and twigs from its host. When mature in mid-August, the larva wraps silk around a branch, hangs from it, and pupates head down. The silk is so strong that it can strangle and kill the branch it hangs from over the course of several years as the branch grows. Adult males transform into moths in four weeks to seek out females for mating. The female never leaves the cocoon, requiring that the male mate with her through the open end at the back of the case. She has no eyes, legs, wings, antennae, and can't eat, but she emits a strong pheromone to attract a mate. After her death with hundreds to several thousand eggs still inside, her offspring hatch and pass through her body, pupal shell and case over several months emerging to start their own cases. Later, her pupal case can be found, full of the yellow remains of eggshells.

The bagworm has a voracious appetite and is considered a serious pest. Host trees develop damaged foliage that will kill the tree if left unchecked. If caught early enough in an infestation, the cases from the previous year can be picked off by hand before the end of May. They are easiest to detect in the fall after their cases have turned brown, especially on evergreen trees. Various bacterial sprays such as Bacillus thuringiensis Bt/Spinosad and stomach insecticides such as carbaryl (Sevin) are used to control infestations.

All content from Kiddle encyclopedia articles (including the article images and facts) can be freely used under Attribution-ShareAlike license, unless stated otherwise. Cite this article:
Evergreen bagworm Facts for Kids. Kiddle Encyclopedia.