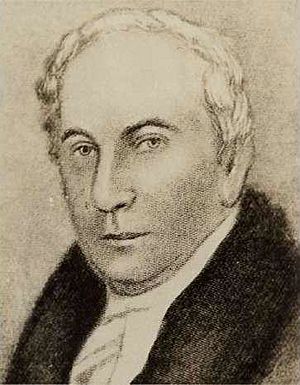 Ezekiel Hart (Hebrew: יחזקאל הרט; May 15, 1770 - September 16, 1843) was a Jewish Canadian businessman and politician, and the first Jew to be elected to public office in the British Empire.

He was born May 15, 1770 at Trois-Rivières, Quebec to Aaron Hart and Dorothea Judah.

Ezekiel Hart created a brewery with his brothers in Trois-Rivières and, on April 11, 1807 was elected to the Legislative Assembly of Lower Canada. Because he was Jewish, he swore his oath on a Hebrew Bible, instead of a Christian Bible, and while wearing a kippah. At the time, British laws did not let Jews have important positions like these, and Hart was expelled from the assembly. He was elected again in 1808 and expelled again.

He did not run for public office again. He continued to live in Trois-Rivières where he was a successful businessman and well-respected member of the community. He served in the militia during the War of 1812 and became colonel in 1830.

He came from a very important and rich family. His father, Aaron Hart, was member of the British forces, and a well-known businessman in Canada. His brothers, Moses and Benjamin, were important businessmen at Trois-Rivières and Montreal. His cousin, Henry Judah, later became a member of the Legislative Assembly of the Province of Canada.

All content from Kiddle encyclopedia articles (including the article images and facts) can be freely used under Attribution-ShareAlike license, unless stated otherwise. Cite this article:
Ezekiel Hart Facts for Kids. Kiddle Encyclopedia.