Faith is a city in the northeastern corner of Meade County, South Dakota, United States. The population was 367 at the 2020 census. The most complete Tyrannosaurus rex skeleton known, Sue, was discovered approximately 15 miles northeast of Faith in August 1990.

According to folk etymology, the town was named Faith because it took faith to live out on the prairie. However, the story of the city as documented in various informal, locally published histories, is that the town was named for Faith Rockefeller, one of the daughters of a major investor in the railroad responsible for founding the town. This is in keeping with the names of other towns on the route of the old railroad (now abandoned), such as Isabel, South Dakota. Faith was the permanent end of the railroad, a local spur off the Milwaukee Road Railroad. The city was established in 1910.

According to the United States Census Bureau, the city has a total area of 1.20 square miles (3.11 km2), all land.

There were 192 households, of which 28.6% had children under the age of 18 living with them, 47.9% were married couples living together, 10.4% had a female householder with no husband present, 2.6% had a male householder with no wife present, and 39.1% were non-families. 36.5% of all households were made up of individuals, and 17.2% had someone living alone who was 65 years of age or older. The average household size was 2.19 and the average family size was 2.91.

Faith is located in the West River region of South Dakota, that section of the state located west of the Missouri River, and in the Northern Great Plains, on a ridge dividing the Cheyenne River to the south and the Grand River and its major tributary, the Moreau River to the north (both are tributaries of the Missouri). Faith is the center of a vast cattle and sheep ranching area, and is the community center for hundreds of scattered ranchsteads. It is located in the extreme northeast corner of Meade County, South Dakota's largest: it is approximately 100 miles to Sturgis, the county seat. It is also located immediately west of the boundary of the Cheyenne River Indian Reservation, home to several Lakota bands organized into the Cheyenne River Sioux Tribe or CRST. The region is well known for deer hunting and also offers pheasant, elk, and recently, prairie mountain lion hunting. A small reservoir, Durkee Lake, is approximately three miles south and offers a local recreation venue, with its boating, fishing, golf course, beach, and camping.

Founded as the town at the end of the railroad, Faith was originally the hub of a homestead boom in the period 1910-1920; but the drought conditions of the 1920s that led to the Dust Bowl of the 1930s quickly replaced abnormally wet conditions of the early 20th century, and the harsh winters of the northern plains quickly drove many sodbusters to more hospitable regions. The town's location allows for ranch families in the area to have schools and stores closer than Sturgis, Fort Pierre, or other regional market towns, but early expectations of steady growth were never realized. Faith is still well known for its rodeos and livestock sales. The town's location made it a necessary stop on the Sunset Trail, also known as the Yellowstone Trail. 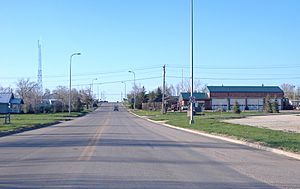 The Faith Municipal Building, designed by U.L Freed, is listed on the National Register of Historic Places.

Faith is accessed from U.S. Route 212 and South Dakota Highway 73. The nearest commercial airports are located at Pierre, the state capital, and Rapid City, the major market city of the region, located 100 mi (160 km) to the southwest. The railroad was constructed in 1910 and abandoned in the 1960s; there is presently no scheduled passenger bus service or freight service to the city.

All content from Kiddle encyclopedia articles (including the article images and facts) can be freely used under Attribution-ShareAlike license, unless stated otherwise. Cite this article:
Faith, South Dakota Facts for Kids. Kiddle Encyclopedia.