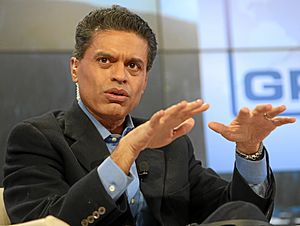 Zakaria is best known for hosting the TV show Fareed Zakaria GPS on CNN. The show mostly is about International Politics. Zakaria has written five books about foreign policy, and has written for Time magazine, Newsweek, and the New York Times. Though a native of India, he is a naturalized US citizen. Zakaria was raised in a Muslim family but is not religious. On his political views, Zakaria calls himself a centrist.

All content from Kiddle encyclopedia articles (including the article images and facts) can be freely used under Attribution-ShareAlike license, unless stated otherwise. Cite this article:
Fareed Zakaria Facts for Kids. Kiddle Encyclopedia.