Fauna of California facts for kids 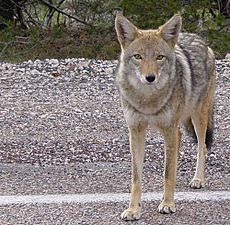 Coyotes live in every habitat in California, from the arid deserts in the south to foggy coastal regions in the north.

The fauna of the State of California may be the most diverse in the United States of America. Of the Lower 48 conterminous states, California has the greatest diversity in climate, terrain and geology in general.

Earth scientists typically divide California into eleven distinct geomorphic provinces with clearly defined boundaries. They are, from north to south, the Klamath Mountains, the Cascade Range, the Modoc Plateau, the Basin and Range, the Coast Ranges, the Central Valley, the Sierra Nevada, the Transverse Ranges, the Mojave Desert, the Peninsular Ranges, and the Colorado Desert. Here, the Los Angeles Basin, the Channel Islands, and the Pacific Ocean are treated as distinct regions.

Common animals that live throughout all the Golden State include raccoons, weasels, otters, beavers, hawks, lizards, owls, coyotes, skunks, snakes, cougars, black bears, deers, squirrels and whales. As of 2013, there are 634 bird species on the California Birds Records Committee, ten of which are introduced species, i.e. not native to the state. One bird, the California quail, is the official state bird and has a breeding habit of mainly shrubby areas and open woodland. Another bird which winters in California is the American white pelican which is a large seabird, with a wingspan reaching up to 110 inches (280 cm). 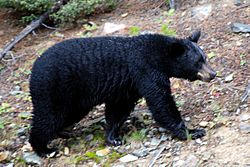 The forests of Northern California are home to many animals, for instance the American black bear. There are between 25 000 and 35 000 black bears in the state.

The forests in northern parts of California have an abundant fauna, which includes for instance the black-tailed deer, black bear, gray fox, cougar, bobcat, brown bear, and Roosevelt elk. Garter snakes and rattlesnakes are common, as are such amphibians as the water-puppy and redwood salamander. The kingfisher, chickadee, towhee, and hummingbird represent the bird life of this region. There are an estimated 1,750 wild horses in Northern California in 2013, according to the Bureau of Land Management.

Mammals of the Canadian zone include the mountain weasel, snowshoe hare, Sierra chickaree, and several species of chipmunk. Conspicuous birds include the blue-fronted jay, Sierra hermit thrush, water ouzel, and Townsend solitaire. Birds become scarcer as one ascends to the Hudsonian zone, and the wolverine is now regarded as rare. Only one bird is native to the high Arctic region—the Sierra rosy finch—but others often visit, including the hummingbird and Clark nutcracker.

Principal mammals of this region are also visitors from other zones; the Sierra coney and white-tailed jackrabbit make their homes here. The bighorn sheep also lives in this mountainous terrain; the bighorn sheep was listed as endangered by the US Fish and Wildlife Service. Some animals in the Yosemite Valley include bobcats, mountain lions, ring-tailed cats, the Steller's jay, California ground squirrels and the American black bear.

In terms of volume, the largest lake in California is Lake Tahoe, located on the California–Nevada border. The area in and around Lake Tahoe is filled with a huge diversity of animals and plants. Many mammals call the Lake Tahoe area home. Included among these are the yellow-bellied marmot, the Douglas squirrel or chickadee, golden-mantled ground squirrel, American martin, mule deer, black bear, coyote, raccoon, beaver, and porcupine. 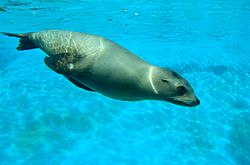 The California sea lion ranges along all of the western coast and islands of California.

Big Sur is a region of the Central Coast of California where the Santa Lucia Mountains rise abruptly from the Pacific Ocean. Big Sur is home to a wide variety of animals. Mammals include bobcat, weasel, coyote, gray fox and puma. Sea lions, harbor seals, elephant seals, gray whales, sea otters, and several species of sharks can be spotted off the rocky coastline.

Many varieties of seabirds and waterfowl also call it home, including seagulls, cormorants, willets, sandpipers, oystercatchers, guillemots and many others. Andrew Molera State Park has over 350 different species of birds. The peregrine falcon, brown pelican, Brandt's cormorant and other seabirds are very easy to see along the coast. Three amphibians are found in the area: Arboreal salamander, California newt and western toad. 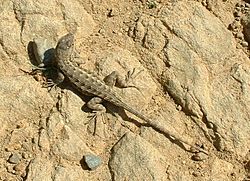 California is home to dozens of species of lizards. The western fence lizard depicted is the most common in Southern California. 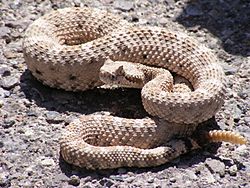 The Sonoran Desert has more species of rattlesnakes (11) than anywhere else in the world.

Southern California consists of one of the more varied collections of geologic, topographic, and natural ecosystem landscapes in a diversity outnumbering other major regions in the country. The region spans from Pacific Channel Islands, shorelines, beaches, and coastal plains, through the Transverse and Peninsular Ranges with their peaks, into the large and small interior valleys, to the vast deserts of California.

Several varieties of rattlesnakes are indigenous to the region. While only the Pacific Northwest rattler makes its home in Northern California, almost a dozen rattlesnakes make their home in the deserts of Southern California, including the western diamondback and the Mojave rattlesnake. Birds in the region include the Anna's hummingbird, acorn woodpecker, northern flicker, California towhee, California vulture, red-tailed hawk and many more.

Although at first glance the Mojave Desert seems to have little in the way of wildlife, it actually contains large, diverse populations. The extremely warm desert environment may seem an unlikely place for animals to thrive or even exist. However, desert animals have adapted to their environment, and each fills an important niche in the desert ecosystem. Known animals in the Mojave Desert include the Mohave rattlesnake, desert tortoise, glossy snake, common side-blotched lizard, California kingsnake, giant hairy scorpion, stripe tailed scorpion and the desert iguana.

Mammals found in the deserts of the lower Sonoran zone include the jackrabbit, kangaroo rat, and opossum. The Texas night owl, roadrunner, cactus wren, and various species of hawk are common birds, and the sidewinder, desert tortoise, and horned toad represent the area's reptilian life. The upper Sonoran zone is home to such mammals as the antelope, brown-footed woodrat, and ring-tailed cat. Birds distinctive to this zone are the California thrasher, the American bushtit, and California condor.

The Colorado River is the longest river in the State of California. Many animals have made the Colorado River and surrounding Lower Colorado River Valley their home. Animals along the river include several species of snakes, scorpions, tarantula, yellow-headed blackbird, desert iguana, kit fox, bobcats and coyotes. Rivers and streams in the Colorado Basin were once home to 49 species of native fish, of which 42 are endemic.

Engineering projects and river regulation have led to the extinction of four species and severe declines in the populations of 40 species. The bonytail chub, razorback sucker, Colorado pikeminnow, and humpback chub are among those considered the most at risk. All are unique to the Colorado River system and well adapted to the river's natural silty conditions and flow variations.

On the Californian Coast, many species of animals and plants can be found. The raccoon, skunk, opossum, and rat are 4 of the species. Large predators include the red fox, bobcat, coyote, American black bear, and the cougar. Wasps, the European honeybee, yellowjackets, flies, moths, and many other insects also live on the Californian coast. Marine life includes orcas and great white sharks. The gray fox is more common than its red cousin.

Raccoons, opossums, skunks, and foxes are common in yards, along with insects, birds, lizards, and squirrels. Bobcats may appear near the wild-land borders, along with rattlesnakes, coyotes, cougars, and bears. 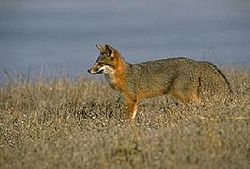 The Channel Island fox is native to six of the eight Channel Islands of California. There are six subspecies of the fox, each unique to the island it lives on, reflecting its evolutionary history.

Other mammals include the harvest mouse, the ground squirrel, and the ornate shrew. Other animals in the islands include island fence lizard, island scrub jay, harbor seal, California sea lion, island night lizard, barn owl, bald eagles, American kestrel, horned lark and meadowlark and California brown pelican. One hundred and forty-five of these species are unique to the islands and found nowhere else in the world. Marine life ranges from microscopic plankton to the endangered blue whale, the largest animal ever to live on earth. The oceans surrounding the islands have a rich marine life, species include for instance orcas, swellshark, bat ray, California moray, great white shark and sea lions.

Slipping into the waters off the coast of California, we have the California sea lion, which can grow up to seven feet long and hangs out in shallow ocean water, beaches and rocks. With its habitat in the open ocean, a less commonly seen animal is the northern elephant seal which can grow up to a massive 14 feet (4.3 metres) and has a population of just over 150,000. The California ocean is home to six species of seals: Guadalupe fur seal, northern fur seal, northern sea lion, California sea lion, northern elephant seal and harbor seal.

All content from Kiddle encyclopedia articles (including the article images and facts) can be freely used under Attribution-ShareAlike license, unless stated otherwise. Cite this article:
Fauna of California Facts for Kids. Kiddle Encyclopedia.