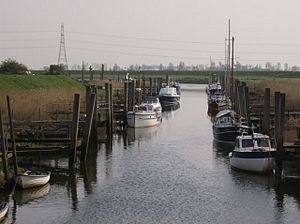 The Fens Waterways Link is a project to improve recreational boating opportunities in the counties of Cambridgeshire and Lincolnshire, England. By a combination of improvements to existing waterways and the construction of new links a circular route between Lincoln, Peterborough, Ely and Boston is planned. The project is being organised by the Environment Agency and financed from the Regional Development Agency and the European Union.

A separate, complementary waterway is the Bedford and Milton Keynes Waterway, opening up a route for broader beam boats between The Fens and the rest of Britain's canal network.

The Environment Agency has obtained a "significant proportion" of the £8m required for phase one. Starting from the north, the first development was the provision of a new tidal lock from the Haven in Boston to the South Forty-Foot Drain at the Black Sluice, opened to traffic on 20 March 2009. Funding for phase two of the project, which will involve widening of the South Forty-Foot Drain from Donington to a new road crossing under the A151 road, a new lock and a junction with the River Glen, a tributary of the River Welland, at Guthram Gowt has been secured from the East Midlands Development Agency.

To connect the Glen to the Welland requires a new tidal lock at the Surfleet Sluices and reconstruction of the tidal Fulney Lock in the River Welland, leading to Spalding.

Another major innovation will be a new cut between the Welland, probably at Peakirk and the River Nene downstream of Peterborough, costing at least £20m and probably using the Folly River and part of either Car Dyke or Cat's Water Drain, entering the Nene near Flag Fen. From here the link will follow the existing Middle Levels through Whittlesey Dyke, King's Dyke and Vermuyden's Drain (Forty Foot Drain) to Chatteris. To avoid the existing troublesome crossing from Salter's Lode to Denver Lock a new lock would probably be provided from Vermuyden's Drain into the Old Bedford River at Welches Dam, and thence to the Great Ouse at Earith, though another possibility is to use Fenton's Lode to avoid most of the tidal section.

The completion of the project would be the long-discussed Bedford and Milton Keynes Waterway canal between Bedford and Milton Keynes following the course of the Great Ouse and joining the Grand Union Canal, mooted as the "first new canal in over a century". The funding for this is slowly appearing and as well as providing for the first time an inland route for broader boats—up to 3.2 metres (10 ft 6 in) wide—between the north and south of England, it would also serve as a flood relief channel for new developments in the areas through which it is to pass through. This extra benefit may release funding from wider sources. Adaptation of existing locks and bridges would be necessary to increase the dimensions to Grand Union Canal gauge, both in width and air draft.

Although using a slightly different route, there are echoes of plans made in 1809 to link the waterways. Two schemes were proposed, one which would have created a canal from Stamford to the Oakham Canal, 11 miles (18 km) due west, with a link from Stamford to the Nene at Peterborough, and a connection from near Market Deeping on the Welland, and a rival scheme to link Stamford to the Grand Junction Canal, both of which included a connection to the South Forty-Foot Drain. Both were put before Parliament in 1811, but neither met with any success. The idea was raised again in 1815 and 1828, but no further action was taken.

All content from Kiddle encyclopedia articles (including the article images and facts) can be freely used under Attribution-ShareAlike license, unless stated otherwise. Cite this article:
Fens Waterways Link Facts for Kids. Kiddle Encyclopedia.