Fieldbrook (formerly, Bokman's Prairie and Buckman's Prairie) is a census-designated place in Humboldt County, California. It is located 7 miles (11 km) north-northeast of Arcata, at an elevation of 203 feet (62 m). The population was 859 at the 2010 census. 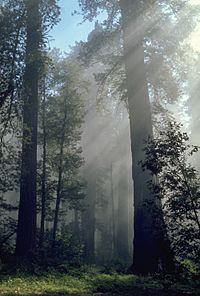 A redwood tree in the area.

Fieldbrook is located on California's North Coast, approximately 300 miles (480 km) north of San Francisco and 65 miles (105 km) south of the Oregon state line. Located on the edge of the dense redwood forest, the area was once home to thriving lumber companies. Fieldbrook is 6 miles (10 km) east of the larger, unincorporated seaside town of McKinleyville and the Arcata-Eureka Airport, approximately 10 miles (16 km) northeast of the harbor city of Arcata, and about 18.2 miles (29.3 km) north of the city of Eureka, the Humboldt County seat. Fieldbrook is at the northern edge of the McKinleyville-Arcata-Eureka-Fortuna corridor along US Highway 101, where about eighty percent of Humboldt County's population lives and most of its businesses are located. The ZIP Code is 95519. The community is inside area code 707.

Fieldbrook is located at the right-angle bend where Murray Road becomes Fieldbrook Road. In the mid-1990s Fieldbrook was a stereotypical sleepy country hamlet, with junk cars sitting in weedy yards along the main road in one block and goats grazing alongside a church in the next. With the decline of the local timber industry, the advent of telecommuting professionals, and the sudden emergence of the North Coast as a retirement destination, Fieldbrook with its mild weather (summer temperatures seldom exceed 75F/24C and winter nights rarely drop below 38F/4C) has recently been undergoing gentrification. Sprawling ranch-style (single-story) homes on isolated 5-acre (20,000 m2) lots wedged between timber tracts are selling for $500,000, and at least one 40-acre (160,000 m2) timber tract has become a gated community.

The few blocks of paved and unpaved roads that comprise Fieldbrook proper include modest homes, an elementary school and two churches, as well as a general store, a winery and an apple orchard that host public events. Larger residences whose owners identify with the Fieldbrook community continue south along Fieldbrook Road as it heads inland and uphill 6 miles (10 km) to the small city of Blue Lake (population 1,200) at the foot of the Coast Range. The road connects there with State Highway 299, a rather adventurous winding route that crosses the mountains and connects with Interstate 5 in Redding, about 90 miles (140 km) east.

Fieldbrook is very nearly on the north bank of the Mad River, which flows into the Pacific Ocean between Arcata and McKinleyville. Although the Mad River supplies the water to much of Humboldt County's population, that small population does not have a significant impact on the river's flow. The north side of Fieldbrook Road is second-growth (coppice, multiple thinner trunks sprouting from the stumps of harvested trees) redwood forest with the occasional clearing for a house, and the logging rules allow the forest canopy to maintain a height of 200 to 300 feet (61 to 91 m). A narrow zone adjacent to the road is maintained as an unlogged buffer, presenting the illusion of virgin forest to tourists, but even on the north side of the buffer, in any given year the majority of the timber tracts have been growing for at least seven years, comprising a wilderness if not exactly parkland. The region abounds with wildlife and residents routinely find deer and elk grazing in their yards, foxes and raccoons digging through their garbage, the occasional black bear or cougar.

A post office operated at Fieldbrook from 1902 to 1932. In the late 1800s to early 1900's much of Fieldbrook was owned by Lumber Companies. Railroad lines ran through Fieldbrook to Humboldt Bay.

All content from Kiddle encyclopedia articles (including the article images and facts) can be freely used under Attribution-ShareAlike license, unless stated otherwise. Cite this article:
Fieldbrook, California Facts for Kids. Kiddle Encyclopedia.