Floodwood is a city in Saint Louis County, Minnesota, United States. The population was 528 at the 2010 census.

Originally a logging community, it was a dairy community for most of its history, but could now be best described as a bedroom community, since most of its working population finds employment in nearby Duluth, Grand Rapids, Hibbing and Cloquet. The city describes itself as "The Catfish Capital of the World", a nickname it gave to itself following the introduction of the community's annual Catfish Days festival.

Long before the city of Floodwood existed, its strategic location at the intersection of the East Savanna River with the Saint Louis River made what would later become the city of Floodwood a strategic economic location. The Savanna Portage was a major route for transportation in the southern Arrowhead, but its importance was magnified greatly with the arrival of European fur traders, who used the route to access rich resources of beaver and other fur animals in the upper Mississippi valley. As early as 1679, Europeans were passing by the modern location of Floodwood as they turned from the Saint Louis River to the East Savanna River on their way to the portage.

However, it was not until the late 19th century that homesteads began to appear in the area. In 1889, it was announced that a railroad would pass through the area. This announcement led to a local population boom in anticipation of the opportunities the railroad would bring. In 1890 J. C. Campbell began large-scale logging operations in the area and the C. N. Nelson Lumber Company of Cloquet built a logging railroad in the area (albeit, the logging railroad only operated in the winter - during the summer, the logging operations took advantage of the Saint Louis River to transport timber to mills in Cloquet).

In 1893, the year that local government was first organized, the first Floodwood School building was constructed of logs. The following year, the Nelson Company was purchased by what would, six years later, become the Weyerhaeuser Timber Company, continuing the intensification of logging activities in the area. The community continued to grow and, in 1899, was finally incorporated.

By the time the 1900 United States Census was conducted, Floodwood had a population of 224, which, within the next 10 years, more than doubled to 481. In 1911, the Floodwood School, which had previously been a county school, became Independent School District No. 19 (after 1958, Independent School District 698), and a new, six room, brick building was built for it. The community continued to grow until the 1918 Cloquet Fire nearly ended the city's history.

Floodwood, like most of its neighbors, survived the fire and began a slow recovery. However, the practical importance of the rivers, and thus Floodwood's greatest economic resource, ended. By 1926, the era of large-scale timber operations in the area had come to a close. With the logging operations gone, Floodwood's survival was again in peril.

The solution had already been present since 1911: as the surrounding areas had pastures suitable for supporting dairy cattle, the focus of the community's economy turned to dairy production following the exit of the timber companies. In 1911, the Floodwood Creamery Cooperative was organized. The creamery became the main support of the local economy, selling local dairy products across the world until it closed in the late 1960s. Dairy cattle are still a major part of the local economy. 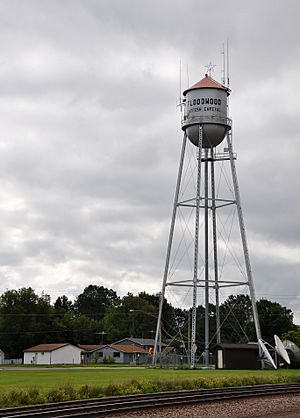 According to the United States Census Bureau, the city has a total area of 1.42 square miles (3.68 km2), all of it land.

The city sits at the junctions of the Floodwood River and the East Savanna River with the Saint Louis River. The area surrounding the city largely comprises forests, wetlands and, where the conditions permit, dairy farms. Nearby peat bogs employ many people from Floodwood, Meadowlands and other communities in southwest Saint Louis County. Protected areas near Floodwood include Savanna Portage State Park, the Savanna State Forest and the Floodwood Game Reserve. The Savanna Portage, together with the three rivers that meet in the city, contributes much to local culture.

There were 257 households, of which 23.7% had children under the age of 18 living with them, 30.0% were married couples living together, 10.5% had a female householder with no husband present, 5.4% had a male householder with no wife present, and 54.1% were non-families. 47.5% of all households were made up of individuals, and 21.4% had someone living alone who was 65 years of age or older. The average household size was 2.03 and the average family size was 2.92.

All content from Kiddle encyclopedia articles (including the article images and facts) can be freely used under Attribution-ShareAlike license, unless stated otherwise. Cite this article:
Floodwood, Minnesota Facts for Kids. Kiddle Encyclopedia.