The Fox Theater in Spokane, Washington is a 1931 Art Deco movie theater. It was designed by architect Robert C. Reamer, notable for his design of the Old Faithful Inn in Yellowstone Park. It was part of the Fox Film Corporation Empire founded by studio mogul William Fox. The theater opened September 3, 1931 and showed films continuously until it closed September 21, 2000 after an engagement of the movie Gladiator starring Russell Crowe.

In May 1961, The Fox Theater sold its organ to a Los Angeles-area collector, who disassembled it and had it shipped to California. The process of dismantling the organ took approximately one week. In 1989, the theater began showing second-run movies at US$1 ($2 in 2022) per ticket. When Regal Cinemas built the new 12-screen megaplex at NorthTown Mall, it sold half of its eight Spokane theaters, including the Fox. The final movie, a screening of Gladiator, was shown on 21 September 2000, and a small ceremony marked the sale of the theater to the Spokane Symphony. 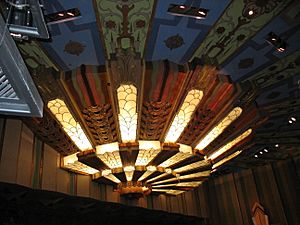 The adjacent Spokane Club sought to purchase and demolish the building to build a parking garage. Although the club had entered into negotiations with the then-owners, Regal Cinemas, the Club dropped its plans to purchase the theater when they learned the Spokane Symphony was interested in the site. The theater was saved when the Spokane Symphony purchased it for US$1.1 million in June 2000. Once the Symphony determined whether the renovations were feasible and the funds could be raised, it began an extensive fund raising campaign to raise the budget needed for restoration. Part of the funds were raised from state sources. Prominent architectural features were renamed in honor of significant donors.

The restoration designer was NAC Architecture of Spokane. Restorers cleaned and painted, recreated lost architectural details and lighting fixtures. They also removed partitions installed in 1975 which converted the theatre into a multiplex. They reduced the original 2,300 seats to 1,700. The Wurlitzer 3-manual, 13-rank theatre organ installed when the building was constructed in 1931 was removed in 1961.

The total cost of the renovations was $31 million and it was completed in November 2007. The theatre was renamed the Martin Woldson Theater at The Fox in honor of the father of a donor who contributed $3 million towards the renovations. It re-opened as the home of the Spokane Symphony on November 17, 2007, presided over by Washington Governor Christine Gregoire. The re-opening included a special celebration featuring a performance by Tony Bennett on November 19, 2007.

Notable performances at the theatre include: Katharine Hepburn, in As You Like It, as well as Marian Anderson, Bing Crosby, and Frank Sinatra. Michelle Obama, wife of the 2008 Democratic presidential nominee Barack Obama held a rally campaigning for her husband's presidential campaign on February 8, 2008.

All content from Kiddle encyclopedia articles (including the article images and facts) can be freely used under Attribution-ShareAlike license, unless stated otherwise. Cite this article:
Fox Theater (Spokane, Washington) Facts for Kids. Kiddle Encyclopedia.