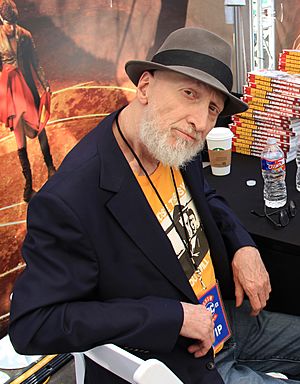 Miller was born in Olney, Maryland, on January 27, 1957, and raised in Montpelier, Vermont.

Because of his interest in comics, Miller moved to New York as a young adult to work as a comic book artist. Miller released his first graphic novel, Ronin, in 1983. Miller later wrote other graphic novels including the Dark Knight Returns and 300.

Miller moved to Los Angeles and worked in Hollywood during the 1980s and 1990s, writing the scripts for Robocop II and III. Not happy with the films, Miller stopped working in TV and movies until 2005, when Miller worked with director Robert Rodgriguez on the film, Sin City.

All content from Kiddle encyclopedia articles (including the article images and facts) can be freely used under Attribution-ShareAlike license, unless stated otherwise. Cite this article:
Frank Miller (comics) Facts for Kids. Kiddle Encyclopedia.