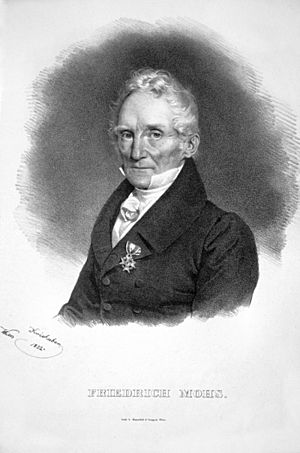 Scientist Mohs was born in Germany. He was a minerologist who studied minerals, chemistry, physics, and mathematics.

He moved to Austria in 1801 where he found a job identifying minerals in a collection that belonged to a rich banker. He used physical characteristics of the crystals to determine what they were. One of the characteristics he used to identify minerals was their hardness.

This scale was called Mohs scale of mineral hardness, named after Friedrich Mohs.

In 1812, Mohs became professor in Graz, Austria. In 1817, Mohs replaced his mentor Werner, who had died, as a tutor at the mining academy in Freiberg, Saxony, starting in 1818. In 1826, he was appointed as a professor of Mineralogy at the University of Vienna.

Mohs ended his remarkable career as a mining advisor at the Mining University in Leoban, Austria, and died aged 66, while holidaying in Italy.

All content from Kiddle encyclopedia articles (including the article images and facts) can be freely used under Attribution-ShareAlike license, unless stated otherwise. Cite this article:
Friedrich Mohs Facts for Kids. Kiddle Encyclopedia.