The fringefin trevally is the only member of the monotypic genus Pantolabus, one of around 30 genera in the jack and horse mackerel family Carangidae, which in turn is part of the order Carangiformes.

The fringefin trevally was scientifically described by the Australian naturalist William Macleay in 1881 based on the holotype specimen taken in Rockingham Bay of Queensland, Australia. He named the species Caranx radiatus, with the specific epithet derived from the Latin word for 'radiating' in reference to the elongated fin filaments. Two years later in 1883, Macleay unknowingly redescribed the same species as Caranx compressus, again from a Queensland-caught specimen. The American ichthyologist Samuel Garman also redescribed the species as Caranx parasitus in 1903. These later names are considered junior synonyms under ICZN rules and considered invalid. The current generic name arose after the Australian ichthyologist Gilbert Whitley examined Garman's Caranx parasitus and concluded it warranted placement in a separate genus with close affinity to the genus Alepes. He named the genus Pantolabus; in his description he gives no explanation of the etymology, but it likely is derived from a Latin name for men, most notably the character of the same name in Horace's Satires. In 1937, Whitley also revised Caranx radiatus, placing it a separate new genus; Absalom. Further revisions recognised the priority of Caranx radiatus as the first description and agreed with the placement in a monotypic genus. Since Whitley's Pantolabus came first, it had priority, creating the currently accepted name of Pantolabus radiatus.

The fringefin trevally was included in a phylogenetic study based upon morphological characteristics by Soko Gushiken. This found the species to be most closely related to the scad genus Alepes, included in a larger monophyletic grouping of scads and horse mackerels as part of the subfamily Caranginae. 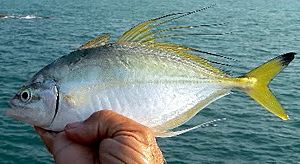 The fringefin trevally is distributed through a small area of the Indo-Pacific, ranging from northern Australia to Papua New Guinea and West Papua in Indonesia. Around Australia, the species is known from Port Hedland in Western Australian around to Gladstone in Queensland.

The fringefin trevally is predominantly an inshore species, rarely found in waters greater than 30 m deep. The species commonly enters estuaries, but is restricted to the lower reaches of these environments.

Little is known of the fringefin trevally, with only a handful of studies in northern Australia recording aspects of its ecology. These focused predominantly on abundance, movements, and habitats of a variety of species. The species was found to be more abundant in trawl catches during the night and on neap tides. On a longer-term scale, the fringefin trevally was present in the Gulf of Carpentaria study area from January to August before moving out of the catch area. The species does not appear to change habitat with age, with individuals of various stages of their lives found in estuarine, inshore, and shelf environments. The fringefin trevally is a predator, feeding on epibenthic crustaceans.

The fringefin trevally is not a commercially targeted species, but still makes up a small percentage of the northern Australian prawn trawls. They are occasionally taken by anglers on bait or small lures and considered to be mediocre table fish.

All content from Kiddle encyclopedia articles (including the article images and facts) can be freely used under Attribution-ShareAlike license, unless stated otherwise. Cite this article:
Fringefin trevally Facts for Kids. Kiddle Encyclopedia.