The General Electric Realty Plot, often referred to locally as the GE Realty Plot, GE Plots or just The Plot, is a residential neighborhood in Schenectady, New York, United States. It is an area of approximately 90 acres (36 ha) just east of Union College.

Originally an undeveloped tract owned by the college, it was sold to General Electric (GE) at the end of the 19th century to help the college pay off a debt. The company's executives subdivided it, laid out streets according to a plan inspired by New York's Central Park and built houses on the land, with covenants requiring a minimum lot size and house value. Two of them were among the first fully electric houses in the U.S., used as models by GE. Also settling in the neighborhood were some local businessmen and politicians, and the research scientists who worked at the company's research laboratory a short distance away. They were collectively responsible for over 400 patents. Some of the key events in their research happened within the Plot, as many took things home to work on.

By 1927 approximately a hundred houses had been built, including one later owned by chemist Irving Langmuir, a GE researcher, for his later life. It has subsequently been designated a National Historic Landmark in recognition of Langmuir's scientific accomplishments, including the Nobel Prize in Chemistry. In 1980 the entire neighborhood was recognized as a historic district and listed on the National Register of Historic Places.

The Plot is no longer so heavily dominated by GE employees, due to the company's greatly reduced presence in the city. Houses in it remain highly valued, and residents pay some of the Capital District region's highest property taxes. Rules enforced by both the neighborhood association and the city's Historic Commission preserve its historic character.

The district is mostly bounded by streets, making it roughly quadrilateral in shape. At the west, Lenox Road divides it from the college campus. Nott Street forms the northern boundary, separating the Realty Plot from Ellis Hospital until West Alley, the rear property lines between houses on Lowell Road and Glenwood Boulevard, which marks the eastern boundary. After crossing Rugby Road, the line turns west to take in the houses on the south side of that street to its intersection with Wendell Avenue, then following Union Avenue back to Lenox.

A small stream known as College Creek or Grooteskill flows west through the district to the Mohawk River, making a ravine 30 feet (9.1 m) deep and 100 feet (30 m) wide through the center of the district. It is spanned by four bluestone arch bridges, all included as contributing properties. Many mature trees grow throughout the district.

The houses within are on lots with a minimum size of 70 by 140 feet (21 by 43 m), set back 35–45 feet (11–14 metres) from the streets they front on. They are predominantly in the Colonial Revival or Georgian Revival architectural styles, with some in the Mission Revival, Queen Anne or Shingle Style.

The Steinmetz Memorial on Wendell Avenue is the only significant open space in the district. It is named for Charles Proteus Steinmetz, the German-born electrical engineer whose research made alternating current possible. Steinmetz's house (at 1297 Wendell Avenue) stood on the grounds of the Memorial. He did research in a backyard lab, and both the lab and the house were demolished in 1944. Steinmetz also chaired the city's school board. A separate public park in Schenectady, known as The Steinmetz Park, is located on Lenox Road but is outside the GE Realty Plot district.

The building at 1184 Rugby Road was developed as a primary school and remained in use for that purpose for many years.

Only five buildings have been added to the district since its initial period of development in the first quarter of the 20th century. They include a modern church by Edward Durrell Stone from the late 1950s on Wendell Avenue. Most of them are otherwise unintrusive, but are not considered contributing due to their more recent construction.

In 1899 Union College announced that, in order to pay off a $30,000 ($766,000 in contemporary dollars2018) debt, it would sell two adjacent tracts of land. One, the College Meadow, was a 30-acre (12 ha) parcel to the west; the other, the College Woods, was 75 acres (30 ha) in size and located immediately to the east of the college. Prominent citizens of the city called for the land to be developed into a park, and a petition to that effect gained 2,200 signatures. The college proposed to lease the land to the city for that purpose, but at a very high annual rate. Shortly afterward, several members of the board of General Electric, which had grown rapidly since Thomas Edison had moved his Edison Machine Works to Schenectady in 1886, announced that the company would buy the land from the college for $57,000 ($1.46 million in contemporary dollars), retiring the college's debt. 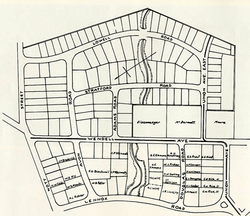 Plat of the original subdivision

They formed a subsidiary, Schenectady Realty Company, to purchase and develop the land. Their goal was to offer another incentive for the company's executives and researchers to stay rather than leave for a competitor or start their own companies. It took until 1903 to grade the streets and lay water and sewer lines and build the bridges.

The plan for the neighborhood was developed by Parse and DeForrest, specialists in the new discipline of urban planning. They took their inspiration from New York City's Central Park, designed by Frederick Law Olmsted and Calvert Vaux. Instead of being planned around a central street, like the way Schenectady had developed along Union Street, thinking which had guided Glenwood and Parkwood boulevards elsewhere in the city, they imagined the area as two smaller lots divided by Wendell Avenue, a street named after a former landowner in the area. They laid out the streets in gentle curves, like the pathways in Central Park. They also tried something new on residential city streets at the time: the "sod gutter", by which there is no curb on a paved street, to further maintain the park-like atmosphere.

Covenants in the deeds for each lot limited construction on it to one single-family house, to be sold or valued at no less than $4,000 ($102,000 in contemporary dollars), almost twice the median home value in Schenectady at that time, a value later raised to account for inflation. Construction had to commence within two years of the purchase of the lot. The setback and lot size restrictions were also set at this time. Another provision limited the height of any fence between properties to 3 feet 6 inches (107 cm), to make sure they were purely ornamental in purpose. When the plans were finished, the property's surveyor claimed "We have here a suburban residential plot second-to-none between New York and Chicago, either in layout, restrictions, or the class of houses upon it."

The streets were mostly named from a combination of the works of Sir Walter Scott and two prominent names in the history of New England, Adams and Lowell. Rugby Road was named due to the use of an adjacent field for rugby matches. Nott Road already existed and had been named for Union College president Eliphalet Nott. Lenox Road was originally spelled with two "n"'s.

Every winter an area behind Brown School was flooded to create a skating pond for residents of the Plot, who received a special lapel tag to identify themselves. The fire hydrant built for this purpose is still extant.

Houses were built and sold rapidly. Some non-GE residents moved in, including the city's then-mayor F.F. Eisenmanger. In 1912 another mayor, George R. Lunn, the first Socialist mayor in New York and later the state's lieutenant governor, had the city take over the maintenance of the streets. This led to the installation of sidewalks, which diluted the original sod-gutter look somewhat.

The original map of the plot shows three large parcels in the Oxford Street area to the east. Not part of the original College Woods property, they were eventually purchased by the realty company in 1914 and developed. These lots lacked the covenants in the earlier ones, and as a result some of the houses on Rugby Road are closer together than the rest of the neighborhood.

By 1927 almost all the lots were bought and built on. Since then only five new buildings have been constructed in the district.

The neighborhood is one of four historic districts recognized by the city of Schenectady. It comes under the purview of its Historic Commission, a seven-member body that meets once a month. Under the city's zoning regulations, any change to a historic building in a district that is visible from a public right-of-way must be approved by the commission. Houses in the district, already the largest in the city, have some of the highest property tax valuations in the Capital District region, from $200–400,000. Many residents pay more than $10,000 annually to the city, county, and school district. Heating bills also run into the thousands.

There is also a neighborhood association, the Realty Plot Association. It publishes a newsletter, The Plot Spotter, sponsors a biennial house and garden tour and works to maintain the neighborhood's historic character. Members also greet new residents with a bottle of champagne and An Enclave of Elegance, a history of the neighborhood.

Union College owns several of the houses, and in the late 20th century decided to convert some of them to administrative offices and student housing. Residents objected, citing the deed covenants and zoning that prohibited business uses, and filed suit. In 2001 a state appeals court upheld a lower-court ruling in the college's favor. As a nonprofit the college was not a business, and its presence predated the creation of the Plot and its deed covenants, so the framers of those covenants would have likely included language explicitly restricting college-related activities if that had been their intent. It converted the Parker-Rice estate at 1128 Lenox Road into offices for its fundraising and alumni relations departments. An attempt to have the state's Court of Appeals, its highest, hear the case was denied.

Most of the homes in the district that have additional significance have it because of their residents.

All content from Kiddle encyclopedia articles (including the article images and facts) can be freely used under Attribution-ShareAlike license, unless stated otherwise. Cite this article:
General Electric Realty Plot Facts for Kids. Kiddle Encyclopedia.