Originally known as the General Letter Office, the headquarters for the General Post Office was built on the eastern side of St. Martin's Le Grand in the City of London between 1825 and 1829 to designs by Robert Smirke. 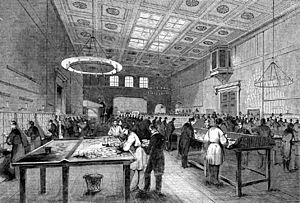 The Inland Letter Office at the General Post Office in 1845.

This was the UK's first purpose-built post office. It was built in the Grecian style with Ionic porticoes, and was 400 feet (120 m) long and 80 feet (24 m) deep. The building's main facade had a central hexastyle Greek Ionic portico with pediment, and two tetra style porticoes without pediments at each end. The main interior was the large letter-carriers room, with its elegant iron gallery and spiral staircase.

From 1868, the GPO experimented with the London Pneumatic Despatch Company services which operated a pneumatic tube from Euston railway station for the delivery of mail, but the experiment was unsuccessful and terminated in 1874. 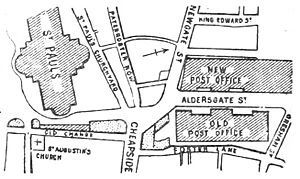 In the 1870s a new building was added on the western side of St. Martin's Le Grand to house the telegraph department, and the GPO North was constructed immediately to the north of the telegraph building in the 1890s as the GPO continued to expand. To avoid confusion, the original General Post Office was renamed GPO East.

When the Central London Railway was constructed in 1900, a nearby station was named Post Office (now called St. Paul's). Robert Smirke's building was closed in 1910 and demolished in 1912 and BT Centre, a post-World War II building and the current headquarters of BT Group, stands on the site of the old telegraph office. 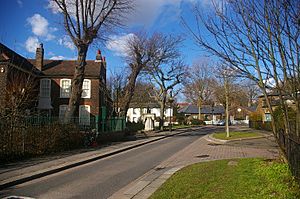 Vestry Road, Walthamstow, the remains of the Ionic capital from the GPO.

The only fragment surviving is the Ionic capital from the right-hand side of the portico. This five-ton piece was presented to Walthamstow urban council and is sited in Vestry Road.

All content from Kiddle encyclopedia articles (including the article images and facts) can be freely used under Attribution-ShareAlike license, unless stated otherwise. Cite this article:
General Post Office, London Facts for Kids. Kiddle Encyclopedia.