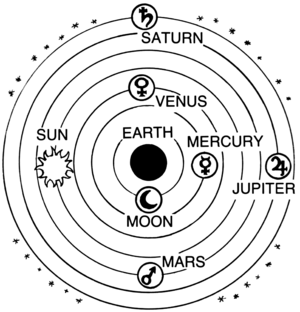 Geocentrism is the belief that the Earth is fixed at the centre of the Universe. Geocentrists accept that the earth is round. Before the 16th century most people believed in the theory of geocentrism. From Earth, it looks like the Sun and stars are moving across the sky. The Ancient Greek astronomer, Ptolemy wrote a book to explain in great detail how the spherical Earth is surrounded by things that move in the sky. From the time of Ptolemy around the 2nd and 3rd centuries AD through to the 16th Century AD educated people who knew the Earth is round almost always believed the Geocentric theory of Ptolemy.

From the 15th to the 17th century, astronomers, especially Copernicus, Galileo and Kepler, found evidence that the Earth is not fixed but moves round the Sun. That is called heliocentrism.

Geocentrism has been proven to be incorrect. However, there are still geocentrists today. In the United States, the National Science Foundation found that about 25% of Americans believe in geocentrism.

All content from Kiddle encyclopedia articles (including the article images and facts) can be freely used under Attribution-ShareAlike license, unless stated otherwise. Cite this article:
Geocentrism Facts for Kids. Kiddle Encyclopedia.