Gibbet Hill, at Hindhead, Surrey, is the apex of the scarp surrounding the Devil's Punch Bowl, not far from the A3 London to Portsmouth road in England.

The summit of Gibbet Hill commands a panoramic view, especially to the north and east. The view to the north overlooks the Devil's Punchbowl, Thursley, Hankley Common, Crooksbury Hill, and the Hog's Back towards Godalming and Guildford. To the east lies the Sussex Weald. To the south, the hills of Haslemere and Blackdown can be seen, with some sections of the South Downs. On a clear day it is possible to see the skyline of London, some 40 miles (64 km) away and including buildings such as The Gherkin, Tower 42 and Wembley Stadium, as well as intermediate landmarks such as towers in Woking and Guildford Cathedral.

Weydown common lies to the south of Gibbet Hill. From 1909 or earlier until 1939 or later, a white horse was carved into the hillside at Combe Head, so that it could be seen from Gibbet Hill, although the figure is now covered by heath. 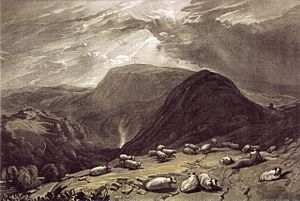 The area was one of disrepute due to the activities of highwaymen and robbers. The Celtic cross is reported either to have been erected by the judge Sir William Erle, or an unmarked memorial erected after his death.

The general area is one of heathland and gorse, and was originally an area of the broomsquire, who would harvest the heather, broom, and birch branches to make brooms. As such, it was often thought to be a pagan or heathen area. 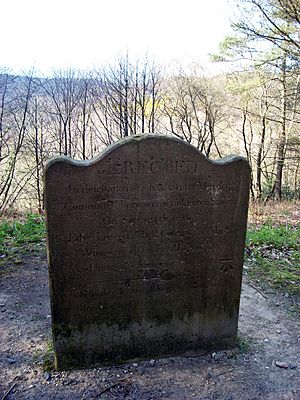 Gibbet Hill and the nearby area were mentioned by Dickens in his 1839 novel Nicholas Nickleby, in the scene where Nickleby was walking from London to Portsmouth.

Dickens was referring to the murder on 24 September 1786 of an Unknown Sailor who was met by three men in the Red Lion at Thursley as he was travelling to his ship in Portsmouth. He bought them drinks and they then followed him and murdered him in the Devil's Punch Bowl. They were quickly apprehended at the Sun Inn in Rake, tried and executed, and their bodies hung on Gibbet Hill. The unknown sailor was buried in Thursley churchyard, and a memorial stone was erected on Gibbet Hill near the scene of the crime.

The area is also the setting for Sabine Baring-Gould's 1896 novel The Broom-squire, of which the sailor's (supposed) child is a central character. In 2000, Peter Moorey suggested that the sailor was an Edward Hardman.

On 6 May 1945, a Curtiss-Wright C-46 Commando (44-77839) of the United States Army Air Forces was flying over Gibbet Hill in bad weather, when the aircraft struck a radar tower and crashed; all 30 passengers and crew died along with one person on the ground.

All content from Kiddle encyclopedia articles (including the article images and facts) can be freely used under Attribution-ShareAlike license, unless stated otherwise. Cite this article:
Gibbet Hill, Hindhead Facts for Kids. Kiddle Encyclopedia.