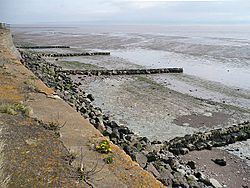 Goldcliff (Welsh: Allteuryn) is a village and community parish to the south east of the city of Newport in South Wales. It lies within the Newport city boundaries in the historic county of Monmouthshire and the preserved county of Gwent.

Origin of the English name

The name is said to have originated from the siliceous limestone cliff, standing about 60 feet (18 m) high, at Hill Farm, rising over a great bed of yellow mica which breaks the level at the shore and has a glittering appearance in sunshine, especially to ships passing in the Bristol Channel. Giraldus Cambrensis, who toured Wales in 1188 refers to the location as "Gouldclyffe" and describes it in Latin as "...glittering with a wonderful brightness".

Together with the neighbouring parishes of Nash and Whitson, it is one of "The Three Parishes" which have long been a unit – geographical, socially, economically and ecclesiastically. All three parishes are typical of the Caldicot Levels. At the highest tides the village lies below sea-level. The entire area is drained by a vast network of inter-linking ditches or 'reens'. passes through the village on its way to the sea. Local folklore maintains that the sides of the Monksditch are laced with smuggler's brandy.

Fields are drained by low depressions running the width of the fields, known locally as grips. The field area between grips is termed a span or Spain. The grips drain into the reens which are slow-moving and in summer months are often stagnant. Reens run towards the sea where they empty between tides at a gout. The levels of the reens is controlled by means of a series of sluices or stanks; separate boards in which may be raised or lowered to keep water levels high enough for livestock to drink. The faster flowing Monksditch carries water from more distant higher ground, above the level of the reens, some of which pass underneath the ditch by means of culverts.

The south of the village is bounded by the foreshore of the Severn Estuary, which lies behind a tall concrete-faced sea wall. A number of groynes can be seen at low tide.

A considerable amount of archaeology has centred on Goldcliff and the intertidal region of the coast near the village has attracted archaeological interest. Goldcliff has notable evidence of occupation by the Silures.

Hidden in the laminated silts of the Severn estuary foreshore are 8,000-year-old (mesolithic) human footprints A report, published jointly by CBA and Cadw, was produced by Martin Bell and colleagues. Bell was instrumental in the discovery of the mesolithic footprints and in 2004 his work at Goldcliff featured on Channel 4's archaeological television programme Time Team. Further archaeological excavation has also been carried out by Martin Locock and colleagues prior to the introduction of the Newport Wetlands reserve, for example at Hill Farm.

Following gales and high tides in 1990, a total of eight Iron Age substantial rectangular buildings were discovered, over the course of several season's work, off the coast of the village. Radiocarbon dating dated the site to the second century BC. The buildings, which may have functioned as a short lived and specialised fishing site, were constructed from vertical posts bearing the marks of iron axes. Timbers from the excavation, which was performed by St David's University College, Lampeter, have been conserved at Newport Museum.

A connection with Roman activity was firmly established with the discovery near Goldcliff Point in 1878 of the inscribed "Goldcliff Stone" recording the work of legionaries on a linear earthwork, presumably a sea wall. Further evidence of occupation was found when ash pits were dug at Nash during construction of the Uskmouth Power Station.

Goldcliff was originally owned by the native princes of Wales, but was taken from Owain ap Caradog (also known as Owain Wan) son of the last king of Gwent, Caradog ap Gruffydd, by the Norman nobleman Robert de Chandos who, shortly before 1113, founded a priory there.

The higher coastal parts of the area were certainly reclaimed by the late-11th and early-12th century when Goldcliff and Nash were granted to the Benedictine priory. Lower-lying areas inland were enclosed and drained by the 13th and 14th century.

Goldcliff, as "Goldcliffe", and nearby Nash are two of the few villages to appear on the Cambriae Typus map of 1573.

On the site of Hill Farm, situated on a prominent knoll of high ground, south of the village and next to the sea, stood Goldcliff Priory. Founded in 1113 as a subject house of the Abbey of Bec in Normandy, it passed during the fifteenth century into the control of Tewkesbury Abbey and then of Eton College. 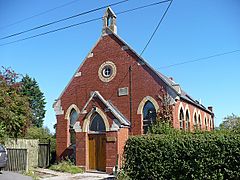 A small enclosure on Chapel Lane to the north of the present parish church, is thought to hold the remains of an ancient chapel, probably connected with the Priory. Also located off Chapel Lane, the farmhouse and barn at Great Newra Farm has Grade II listed buildings.

The quaint Congregational (later United Reformed Church) chapel near the junction of the Sea Wall Road, built in 1840 and restored in 1900–01, is now a private dwelling, but was still active as late as the 1980s.

Goldcliff has long been associated with the tidal putcher fishing of salmon, which may well have had its origins with the Priory or even in Roman times. The technique used the so-called "putcher" basket traditionally made from hazel rods and withy (willow) plait, set out against the tides in huge wooden "ranks". The last main exponent of the art of wooden putcher-making at Goldcliff was George Whittaker, although a working knowledge of the technique was also kept into the 1970s by Wyndham Howells of Saltmarsh Farm, the last full-time fisherman at Goldcliff. Deeds for Saltmarsh Farm for 1867–1918 are held by Gwent Record Office

The mixed school for the parishes of Goldcliff and Whitson was erected in 1872 for 60 children and in 1901 had an average attendance of 46, with a Miss Mary Edith Tomlinson as the mistress. Until it closed in July 1954, the school received an annual gift of £2 from Eton College 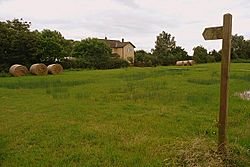 Kelly's 1901 Directory lists the only private residence in the village as "The Moorlands", but has no fewer than 27 commercial concerns, mostly farmers, but also including a haulier, two fishermen, a female publican, a farm bailiff, a hay dealer, a mason and a shoe maker. The Directory also lists a Mrs Annie Louise Taylor as hotellier at "The Temperance Hotel". The hotel, situated at the end of the Sea Wall Road, was a well-known landmark as late as the 1950s.

The Moorlands, a Victorian house built in 1870 for the Waters family, has a garden which includes acacia, American oak and Christmas strawberry. 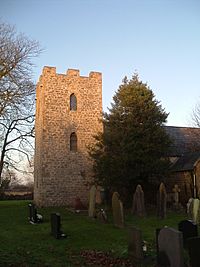 The parish church of Saint Mary Magdelene has a well maintained churchyard with a beautiful tree arch canopy and many old gravestones. It is an ancient stone building in the Early English style and is located directly behind The Farmer's Arms public house. At the front of the churchyard are the remains of an ancient mounded cross. The first vicar was Roger de Holbrook in 1349 and church records are available from 1724. 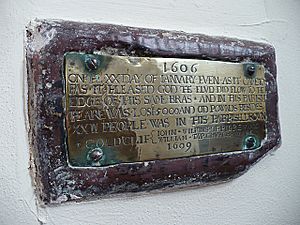 1607 Flood plaque, in St Mary's Church. The plaque records the year as 1606 because, under the Julian calendar in use at that time, the new year did not start until Lady Day, 25 March.

The church itself has a small brass plaque on the north wall near the altar, commemorating the Great Flood of 1607 when a storm surge, or possibly tsunami, swept along the Bristol Channel drowning 2,000 people. The plate, about three feet above ground level today at this point, marks the height of the flood waters. The estimate of financial loss is given as approximately £5,000 (£720,000 in 2014).2018

The tower contains one bell, recast by Taylors of Loughborough in 1969.

The former vicarage for the three parishes, located in Whitson, is now a private dwelling. The minister for the Rectoral Benefice of Magor, which includes Magor, Nash, Undy, Llanwern, Wilcrick, Bishton, Llanmartin, Langstone and Redwick is based in Magor.

Following interior re-decoration in 2006, including the removal of the old pews and pulpit, a service of re-dedication was held on 4 February 2007 with the Bishop of Monmouth. The interior is now decorated with individually dedicated chairs and matching carpet. 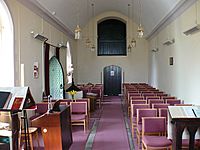 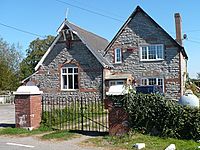 Goldcliff is home to part of the extensive Newport Wetlands, opened in March 2000 as a mitigation for the loss of mudflats caused by the building of the Cardiff Bay Barrage. Parts of Goldcliff and Whitson together are designated a Site of Special Scientific Interest SSSI.

The village pub is The Farmer's Arms, located close to the church. The village still has use of a communal parish room located in the Old School at the side of the Monksditch, which there forms the border with Whitson.

The village is served by a public bus service (Route 63 – six days a week) provided by Newport Bus. The local newspaper is the South Wales Argus which is published in Newport.

There are tea rooms, with toilet facilities, at the seawall.

All content from Kiddle encyclopedia articles (including the article images and facts) can be freely used under Attribution-ShareAlike license, unless stated otherwise. Cite this article:
Goldcliff, Newport Facts for Kids. Kiddle Encyclopedia.