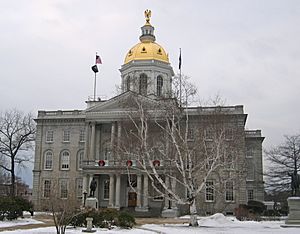 The New Hampshire state capital is Concord. The capital was Portsmouth during colonial times, and Exeter from 1775 to 1808. The Governor's office, some other executive offices, and both legislative chambers are in the State House. The Legislative Office Building is behind the State House in this photograph; the state Supreme Court and other agencies are in an office park on the other (east) side of the Merrimack River.

The Democratic Party, the Libertarian Party, and the Republican Party are the only official parties, for which the state lets a voter register, holds a primary election, and gives a column on the general-election ballot. Minor parties must poll 4% in a statewide or Congressional election to become official parties, and they lose that designation if they cease to poll 4%. The Libertarian Party had official party status from 1990 to 1994, but did not regain it until the 2016 election.

A voter who is registered in an official political party cannot vote in a different party's primary election. A voter who is registered "independent" can vote in any party's primary, but is automatically registered in the party in which he or she votes. The voter can change registration at the polls after voting, and can also change registration in periodic meetings of a town's Supervisors of the Checklist or at the City Clerk's office. These rules are designed to impede the casting of a cross-over vote for a different party, which may have the goal of sabotaging its nomination. Registering in a party constrains a voter's choice of ballot, but demonstrates support for the chosen party, and is a prerequisite to being a candidate of that party.

All content from Kiddle encyclopedia articles (including the article images and facts) can be freely used under Attribution-ShareAlike license, unless stated otherwise. Cite this article:
Government of New Hampshire Facts for Kids. Kiddle Encyclopedia.