Grand Duchess Maria Nikolaevna of Russia (Maria Nikolaevna Romanova; Russian: Великая Княжна Мария Николаевна, June 26 [O.S. June 14] 1899 – July 17, 1918) was the third daughter of Tsar Nicholas II of Russia and Tsarina Alexandra Fyodorovna (Alix of Hesse). After she was murdered in the Russian Revolution of 1917, she was canonized as a passion bearer by the Russian Orthodox Church.

When she lived, Maria was not old enough to be a Red Cross nurse like her sisters. Instead, she was patroness of a hospital and visited wounded soldiers. She was very interested in the lives of the soldiers, and had several innocent crushes on the young men she met. She wanted to marry and have a big family. She was known to be flirtatious at a young age.

She was an elder sister of Grand Duchess Anastasia Nikolaevna of Russia, whose alleged escape from the assassination of the imperial family was rumored for nearly 90 years. However, it was later proven that Anastasia did not escape and that those who claimed to be her were imposters.

In the 1990s, it was suggested that Maria might have been the grand duchess whose remains were missing from the Romanov grave that was discovered near Yekaterinburg, Russia. Further remains were discovered in 2007, and DNA analysis subsequently proved that the entire Imperial family had been murdered in 1918.

A funeral for the remains of Maria and Alexei to be buried with their family in October 2015 was postponed indefinitely by the Russian Orthodox Church, which took custody of the remains in December and declared without explanation that the case required further study and the remains are stored in a Russian state repository. 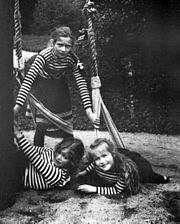 People described Maria as a pretty, flirtatious girl. She was plump, with light brown hair and big blue eyes that her family called "Marie's saucers". Her French teacher Pierre Gilliard said Maria was tall and healthy, with rosy cheeks. Tatiana Botkina thought Maria's eyes were "soft and gentle." When she was a baby, people compared her to one of Botticelli's angels. Grand Duke Vladimir Alexandrovich of Russia called her "The Amiable (Good-hearted) Baby".

When she was young, Maria once ran away from her bath and ran naked (without clothes) all around the palace. Her Irish nurse, Margaretta Eager, who was talking about politics with a friend, did not even notice. "Fortunately, I arrived just at that moment, picked her up and carried her back to Miss Eagar," remembered her aunt Grand Duchess Olga Alexandrovna of Russia. Her older sisters did not like to let Maria join in their games. They once even called Maria their "stepsister". This was because she was so good and never got into trouble, according to Margaretta Eagar. However, even the sweet Maria could be mischievous sometimes. Once, when she was young, she stole some biscuits from her mother's tea table. The governess and Alexandra wanted her to go to bed as a punishment, but Nicholas said no. He said, "I was always afraid (fearful) of the wings growing. I am glad to see she is only a human child." Eagar remarked that Maria loved her father deeply. She often tried to run away from the nursery to "go to Papa". When her father was ill with typhoid, Maria covered a small picture of him with kisses every night.

She was raised very simply. She shared a room with her sister Anastasia, where the walls were painted gray, and the ceiling was painted with butterflies. The furniture was simple and in white and green colors.

All content from Kiddle encyclopedia articles (including the article images and facts) can be freely used under Attribution-ShareAlike license, unless stated otherwise. Cite this article:
Grand Duchess Maria Nikolaevna of Russia (1899–1918) Facts for Kids. Kiddle Encyclopedia.