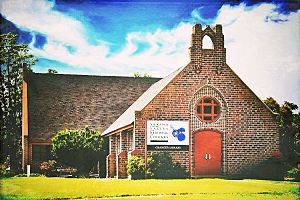 The Yakima Valley Library in Granger

Granger is a city in Yakima County, Washington, United States. The population was 3,246 at the 2010 census. Although it was classified as a town in 2000, it has since been reclassified as a city.

Granger was founded in 1902 and named after Walter Granger, superintendent of the Washington Irrigation Company who also laid out the cities of Zillah and Sunnyside. Granger was officially incorporated on September 28, 1909. In the 1910s and 20's, the town had several large industries including a tile and brick company and a cider mill.

The Granger Farm Workers Camp, which opened in May, 1941 two miles north of the city, became known as the Crewport, Washington Farm Labor Camp. It was built by the Farm Security Administration to house Dust Bowl refugees, initially White, and later Mexican Americans, who were brought in to work in the Yakima Valley as a result of World War II labor shortages. The camp closed in the late 1960s.

The Latin radio station "Radio Cadena" or "Radio KDNA" building is in the town of Granger, and was first built in 1979. It was an activist radio station that educated farm workers, advocated farm workers' organizations, and provided Spanish language programs to non-English speaking families. In 2008, a new station building was built.

There were 774 households, of which 66.3% had children under the age of 18 living with them, 60.2% were married couples living together, 17.6% had a female householder with no husband present, 9.4% had a male householder with no wife present, and 12.8% were non-families. 10.5% of all households were made up of individuals, and 4.5% had someone living alone who was 65 years of age or older. The average household size was 4.14 and the average family size was 4.41.

All content from Kiddle encyclopedia articles (including the article images and facts) can be freely used under Attribution-ShareAlike license, unless stated otherwise. Cite this article:
Granger, Washington Facts for Kids. Kiddle Encyclopedia.